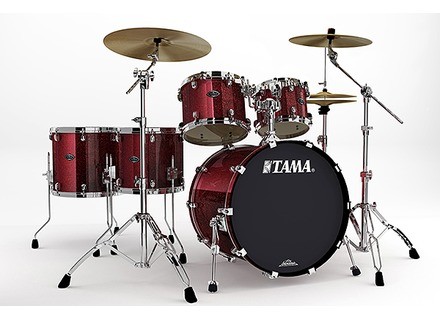 Tama Starclassic Performer B/B PL52S
4
My name is Dino Paradiso. I have been playing drums for about 8 years now in sevral different band, mainly with punk rock influence, but lately my band and I have gotten much heavier, therefore I needed to acquire a heavier and deeper sounding kit.

I have purchased the Tama Starclassic Performer B/B Dark Cherry Fade kit with a 22/18 bass drum, a 10/8 and 12/9 tom, a 16/14 floor tom, a 14/5.5 snare drum, a rock n sock drum throne with back rest, an Iron Cobra Double pedal Limited adition (all chrome), a Lever Glide HH905 Hi that stand, 4x H3CCBW Boom Stands and Hs30W Snare Stand. All for more or less 5000$ at Ital Melodie, Montreal Qc. Lets just say that I went all out because I want this kit to last for quite a long time.

My main kit use to be a Sonor Force 3003 which worked well but was too small by size, sound and quality for the music that I am playing.

I had shopped around for two year for a kit that would give me the sound that I required. I was hesetant between the tama starclassic performer b/b and the Gretsch renown maple. The Gretsch had a great look to it and seamed adaqute for my requirements but when I tried it out in the store, I was completely turned off by its sound, the clerk (who was a professional) even changed the skins on it and tried to tune it himself but after 15 minutes he gave up and told me that the reason it sounds so bad is because it is made in China and even though they usually sound rather good, the sound quality is not consitant from drum to drum. It made sense to me. Thats when I turned to the Tama. I was told that the Starclassic performer b/b had enhanced lows due to the inner plys of Bubinga wood. After giving it a few hits, I was sold.
But because of all of the other drums inside the store, its true tones were a litle difficult to makeout but I was sitll able to hear all the lows in it. But stil I wish that I could have heared in on its own. This made me a litle heasetant but I still ordered it in Dark Cherry Fade and then recieved it 5 months later.

I can't figure out what I love the most about this kit, the sound, the look or all the great features.
The pictures of the finishes on the Tama Website do not do them justice. I was a litle turned off by the photos when I ordered my kit, but when I had finally recieved it, I was compeletely stunned.
The sound is versatile, and it always has an enhanced low end weather tuned high, mid, or low. My bass brum sounds like its already miked and the snare is quite versitile.

There is not much that I do not love about this kit but what I do not like, is the loose air holes on the toms and floor toms. The clerk at the store told me that it wasent normal and that to could be fixed. This does create a problem because the loose hadware on the drum sometimes creates a small buzz. It is not consistent problem. Most of the time it doesent buzz. Also I do not like the evans skin that come with it, I prefer Remo.
Also Tama already has pre configured kits which limits the customer's shell size choices. I wanted a 13/7 snare drum and my bass drum to be 2 inches deeper instead, but that was not possible.
I also wish that they would have more finsishes options like their maple series.

Construction quality wise, they are very similar to my point of view. I would even say that they are neck and neck. Even the sound is almost the same in term of quality. I would say that they are the same exept that the maple is obviously more versitile and warm. As for the performer b/b, it simplylouder and has more lows, more chunk and more balls. It is probably not as versatile as the maple but would still sound great no matter what type of music you will play. If you ask me, it it just depends on the player.

If your looking for a cheeper alternative to maple or simply a lower and deeper sounding kit, the performer b/b is always a good idea.

Personally i don't think that it should be considered of lower quality or lower series than the Starclassic maple because they are so similar in every way. I just think that they are different. To my point of view I think that they would suite most people who play heavy music or reggae.

The sound quality, the awsome features and the amazing looks to this kit makes it a pro kit by my standads. The best part is that its cheeper than the Starclassic Maple.

This kit has BALLS!!!

juju_jami's review (This content has been automatically translated from French)

Tama Starclassic Performer B/B PL52S
5
Attention, exceptional drumkit!
Tama is very strong with its new performance by combining the Birch Bubinga, with the new Starcaster (chrome, beautiful), a new drum 10 lugs (against 8 for the old) ... Anyway, we enter the beginning the premium (see premium at all) by being in a value for money that leaves other brands behind. Indeed, the set included by the snare comes with Evans Genera G2 skin, the circle is cast ... The finish is perfect, nothing to say, both the varnish, the spikes of adjustable bass drum, MTH909 Tom attachment. The toms sound really sharp, bass perfectly. The setting is accurate and easy (I have added that plastic circles Evans on 4 Toms, and that's it)
In short, a quality instrument