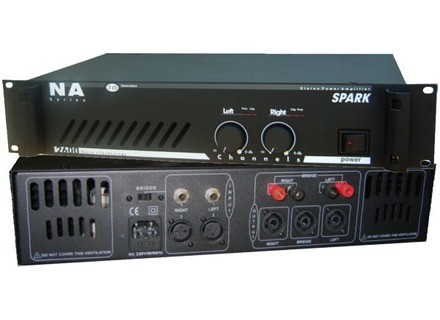 Bob l'éponge's review (This content has been automatically translated from French)

Spark NA2600
1
- How long have you use it?
3 days, but the day of performance for which the amp did not buy it even refused to come on (I can assure you we tried everything to change the power supply cable through fuses), I knew at that price I would not have an amp but when same quality!

- What is the particular feature you like best and least?
+ on: uh the price? (239 New)
the -: learning that it's actually an amp in manufacturing BOOST I qq dj had problem with this brand, so if I had known what dtail before buying, I would have probably failed !

- Have you tried many other models before acqurir?
Not bad yes, but I do not remember because MODELS That was in the rental

- How do you report qualitprix?
It tends to 0

- With the exprience, you do again this choice? ...
Uh no, I'm going to change the amp ds Tuesday and take a better, because if it also appears unreliable ...
While the default manufacturing ca exist, but with an amp in this price range, there probably has not

I'll put 2 because when it works ca not be so bad ...
Did you find this review helpful?yesno
»

eden75008's review (This content has been automatically translated from French)

Spark NA2600
5
I have this amp for quite some time and really no problems. I use two 401 NEON who was with the pack Promo.
I think all the amps may have a defect in unpacking .. Me mine was super excited and more than I paid 180 euros instead of 239 euros.
Did you find this review helpful?yesno
»

jolebanner's review (This content has been automatically translated from French)

What is so special that you like most and least?
The correct price 180euro, not very powerful but quite sufficient for food boxes
The least he has a "hum" loud enough when it is powered

How would you rate the quality / price?
Correct

With experience, you do again this choice? ...
Surment, I'll wait a little, but he already was pushed several times a night, with power cut again (not good ...) but it would shock!
Did you find this review helpful?yesno
»

djplus's review (This content has been automatically translated from French)

Spark NA2600
5
Great amp I have for quite some time (4 years) and never galre
I recommend it
Did you find this review helpful?yesno
»
Read the 6 user reviews on the Spark NA2600 »