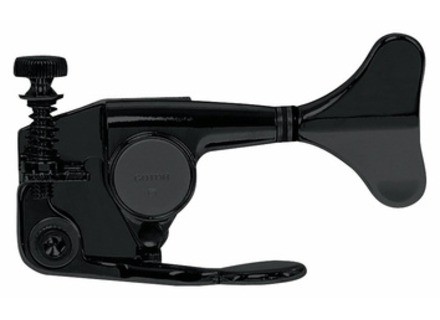 Hipshot D-tuner H 20600B
5
Mechanical form "Warwick" (it may have an official name ...) with a lever that switches the whole compared to a plate which itself is attached to the head of the bass.
By tilting the axis of the dolly, it relaxes the string in question until an adjustable stop blocking mechanics.

I mounted the black for my Corvette has a matching black hardware chrome.
On the aesthetic level, the Hipshot is a bit less bright than the original mechanical. If a nose can be seen above it is hardly different. At 2 meters, or in the shadows of a scene, it seems quite the same.

Very easy to install with a simple screwdriver.

I installed in place of the mechanics of thick rope to move in in D Mi 5 / 10 seconds. It really is a gadget that allows extra on stage to chain without wasting time.
Of course, for some it is useless because they play only in E, or D, or what they want

But for those who like me are having to change, it's just essential.

Before, I was doing a play list in the light of tuning (all the pieces together in D at the end or beginning) to minimize the loss of time by re-tuning. But now I do not care more than logical sequence the pieces according to their intensity.
It's even more fun for the audience to hear the tone change, it is less tiring.
And as enchaine instantly, you can launch the new song using the emotion generated by the previous. I think it's important.

The sound is identical to that obtained with the mechanical origin.
Important detail: the adjustable stop is blocked by a spring and does not move between uses.
So my Mi is reliable and is an E, the D is a D.
No need for frequent re-tuning, the drop-D reliable and immediate.

In summary, it is not given (in 100 euros), but for those who change tuning between songs, it's a great idea that is well worth the price.
One small step for Hipshot, one giant leap for the comfort of bassist.