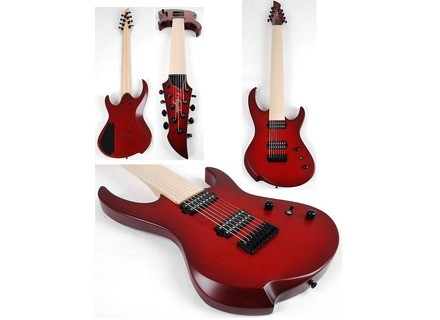 All user reviews for the Agile Intrepid Dual Standard 8 Fretless

Agile Intrepid Dual Standard 8 Fretless
3
It is crazy the amount of ideas Rondomusic will satisfy with their Agile line. Im sure less than 5 people wanted a fretless 8 string but they made it anyway. It is part of their 8 string line up which has many options. You have a choice between a 28 and 30 inch scale, with tremolo or hardtail hipshot bridge. You have a choice between one or two pickups which can be passive or EMG 808. This guitar has the hipshot bridge with dual passive pickups. It has a bolt on maple neck with a maple fretboard with no frets on it. It has a volume control and a tone control.

Playing a fretless guitar is very different than playing a normal guitar. It is even different than playing a fretless bass. Since the guitar has a shorter scale and more strings all the notes are closer together and it is easier to sound out of tune. You have to press a lot harder on the string and you have to press exactly where the fret would be. On a normal guitar you would press behind the fret or in the middle space of the fret and it would make the sound. If you press in those places on guitar guitar you would sound out of tune and really bad.

There is nothing worse than a fretless being played badly. Unless you have perfect bitch or have been playing fretless for years you will probably sound bad on this. Its not that the guitar it self sounds bad it is that you are not good enough to play the guitar. Hardly anyone is. Also on an 8 string I would recommend active pickups. It is hard to find a passive that can provide the clarity in all the frequencies an 8 string can do. This might be an instance where you dont want to hear all your notes.

There is a reason only the most accomplished players play fretless guitar. It is very difficult to sound good doing it. And none of these guys play fretless guitar primarily. Its nice that you can get one so cheap now but I do not see the point. Its just going to make a lot of beginners sound really bad. I would recommend staying with normal guitars but if you are looking to replicate some Charles Ives stuff or something on guitar this could be for you.
Did you find this review helpful?yesno
Cookies help us improve performance, enhance user experience and deliver our services. By using our services, you agree to our use of cookies. Find out more.