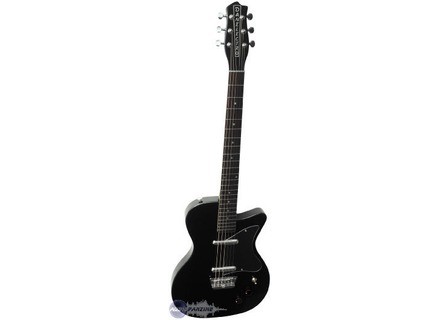 Danelectro DC-59 Baritone
5
The Danelectro DC-59 Baritone guitar is an electric guitar that I have experience using the recording studio. I believe that the DC-59 also comes as a standard strung electric guitar, but I've only used the baritone version. I don't know too much background information about the guitar, and I've only used it on a few sessions, but in my short time using it I've really enjoyed the way it plays and sounds. In terms of pick ups, it's got two two single coils with a pick up selector and volume and tone knobs that control the sound on both pick ups no matter which you're using.

Playing the Danelectro DC-59 Baritone is a real pleasure, as I find it easy to navigate around the neck. I've found it to be an easy guitar in general to play, regardless of the fact that it is a baritone guitar. The guitar is definitely on the lighter side, as seems to be the case with many of the Danelectro guitars that I've used. Getting a nice sound isn't too difficult if you know how to play, although there isn't much room for getting all that many different sounds.

I really wasn't expecting the Danelectro DC-59 Baritone guitar to sound as good as it does, but it really sounds good. It has a very full bodied sound, which is really a necessity when you're talking about baritone guitar. In general I really can't get enough of the way baritone guitars sound, and this one just further emphasizes my love for these type of guitars. I've used the DC-59 Baritone with a '65 Fender Deluxe Reverb with no effects beyond what is on the amp, and I miced the amp up with a Shure SM57 and a Royer 121. The end result was really fantastic, and since the first time I've used this set up, I've done the same thing a few other times with the same stellar results.

I haven't seen another Danelectro DC-59 Baritone out there other than the one that I've used, and a quick google search will lead me to believe that there aren't too many of them available. I'm glad that I've been able to use one at the studio that I did, as I'm very happy I've experienced this guitar. I don't currently own a baritone guitar, but hopefully whenever I'm able to pick one up I'll be able to get my hands on a DC-59.