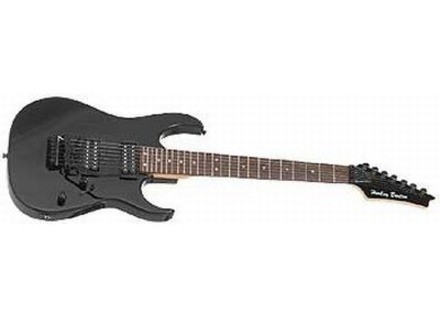 Harley Benton R7-450FR
4
This guitar has two high-output double-humbucking pickups, a pickup switch, a volume knob, and a tone knob. It has 24 frets, a bolt-on neck, and a standard bridge.

I originally had a Harley Benton I bought some years ago. It's a great guitar, but because of the Floyd Rose style tremolo, whenever I would go to mute the strings I get a lot of noise just before the strings finally silenced. Since this has a standard bridge, I thought it would be a better match. I don't know what the actual difference is in construction between this guitar and my XT, but it is much slower to play up and down the neck and the tone is not nearly as good as the XT.

It is easy to access the top notes, and the sound is decent, but I just wasn't as happy with the overall tone and build quality of this guitar compared with my XT. Maybe I would have liked this guitar more had I not previously owned the XT, but overall I was disappointed.

The shape of this guitar is great. It looks sharp and is well balanced, it's just too slow to play on the neck for my liking.
This guitar is not meant to play clean with these kinds of pickups. As I wrote above, I was disappointed by the overall tone of this guitar when compared with the XT.

Overall this guitar did not meet my needs and I sold it not long after purchasing it. I much prefer the Warrior XT, even if I have to deal with the Floyd Rose noise. I would not buy this guitar again, nor recommend it to anyone else. For my money, I'd stick with the XT or the WRMG, or even the WR1 if you have the money. So save up your money and upgrade!
Did you find this review helpful?yesno
»

Harley Benton R7-450FR
4
Everything has pretty much said in the "information" associated with this product, if not the origin, probably Asia but I have no certainties.
Big, big, big, big downside for me, Floyd.
I found it very poor quality, both material level (Floyd trashing one screw by tightening it is extremely easy) than at 2 years in use because I have not managed to make it yours perfect agreement despite many efforts.
Detuning been light if set correctly, but this, which I boiled the crisis severely.
After you can invest in a Tremol-no, or other system of its kind, it should solve the problem.
The tuners are average but not completely discard.

No problem with the violin, honestly it's great.
The guitar is balanced and does not sting the nose more than another, the handle a little big guy is obviously due to the presence of the 7th string but nothing insurmountable.
It is not heavier than a Les Paul and access to treble is no problem.
The handle on mine not slide very well at first, over time it has greatly arranged however.
The same attention is not new set (handle, floyd, action, etc ...) must therefore provide the do it yourself at the reception.

Well then clearly the problem lies in his, as if the violin is very good, low price is explained well at one time or another.
But it's not as bad as you might think.
The pickups are obviously not very precise and give a rather muddy but with good set of distortion and amp you can get an acceptable sound for playing the task which hurts while maintaining clear sound rather honest also.
I had a period installed Seymour Duncan SH7-1 on the guitar and the clean sound was great along with the saturated very good.
A small detail, with the original pickups were really dégueus crunch tones, but it's not quite the target object is not it?

The guitar is really cheap and there are no complaints about the violin so if you be willing to invest € 150-200 more to upgrade pickups and Floyd I think you should be able to keep the comparison even outperform the 1st prize home Ibanez, Schecter or ESP.
Did you find this review helpful?yesno
»

lolomicro42's review (This content has been automatically translated from French)" very well!"

Harley Benton R7-450FR
5
made in china
- A floyd, two double pickups, volume, tone (which is not very useful)

the handle fits comfortably in my hand, he slips normal but nothing more, it's a good 7 string so much wider than normal, although there are 24 frets deburred, microphones gives very well the only condition set out the , the studs are screwed to the microphones to be resolved, although the height to the microphones, but as on all guitars!, even for this model "entry level" sound? hey you play well in the big serious is top!

then the sound! okk so that the metal for the serious hard as I said above a few settings, but the sound comes first finger!, so it's silly to say but we must not too bad déjas play to draw profit, not need to change pickups! for crystal clear sound that's just ben there!, it is not made for that

I have a few days, that's like that, I wanted a skyscraper with a floyd, cheap! it was good, but the current is fine with, I saw immediately the small defects, it's china!, but we see the qualities I find that the microphones work very well, should be good to spend time to properly settle the screws microphones, it's 14 screws out rule is long, but after the happiness, the sound is!, before playing three hours I have put any rule, change (the strings) short, it is not operational right now, but for the price, with more experience I think I'd make the same choice, because even if you have to go well for you time the set is worth it!
Did you find this review helpful?yesno
»

I bought my 7-string on the site of HB Thomann (http://www.thomann.de). This brand is found in France, having been created by Thomann, and is distributed by them in Germany.

Basically, I bought cheap (100 euros) because I just wanted to try a 7 string and see if I could get used to it. The model I own has the distinction of having a fixed bridge with strings that pass through the body (and thus sustain exceptionally, well above all my other guitars for that matter). For cons, the model with fixed bridge no longer exists to my knowledge, as proposed by Thomann more on their site.

To be clear, apart from its sustain, this guitar delivered in the state was pretty bad. I have set it entirely (neck, harmonics, height of bridges) at its reception, magnetically shielded electronics (aluminum foil in the cavity of the electron), and changing the microphone that had a good sharp potato, but not top either ... on the other hand, once the Seymour Duncan SH7 posed above, there is a scratch really nice (I've bought more music pigalle negotiating the price to 100 euros by telling the guy I would have at that price on the Thomann). Since its transformation, almost everything I record with, and I do most of my shows on it.

Good, but here's a summary of what I like or not:

I like:
- Finishing (except the writing on the head that goes away when you rub it, and I also completely removed, so that you no longer know what brand it is).
- The handle, but not too late, and is perfectly playable, even in the extreme treble.
- The balance and weight, it is perfectly balanced and not too heavy (a little less than a ibanez RG), not tired repeating with the strap
- The microphone HB in the severe HS-7 in acute (as against the two together, it's weird, so I decided to plug them in line, and suddenly the 2-position pickup selector on the j ' have a sound that somewhat resembles that of a citarre)
It fixed bridge and string through body
-The price (100 euros + 100th micro scratches)

I do not like:
- The state of the scratches on delivery (I had to redo all the settings)
- Logo Harley Benton (but as it goes since it's just ink on top of the varnish, it does not matter: p)
- Electronics not isolated electromagnetic (but hey, a stroke of aluminum foil in the cavities and hop is set)
Did you find this review helpful?yesno
»
Read the 8 user reviews on the Harley Benton R7-450FR »