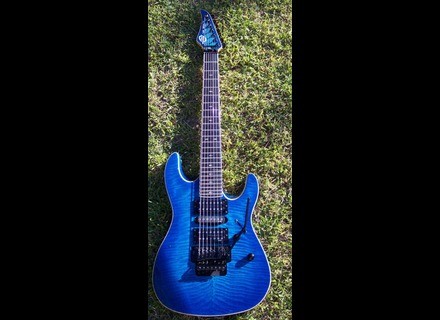 The Beast Seven Pro, Electric solidbody baritone or 7/8 string guitar from Lâg in the The Beast series.

melancoliasolist's review (This content has been automatically translated from French)

brief is the belle epoque of crafts french very well finished with a table of rare beauty!

The handle is a veritable runway! Can a lil rounder such a universe, but nothing terribly annoying!
ACCESS is exellent acute freight scaloppé help for extreme bends! (Easy to play with black star!)
we feel fine mahogany but lighter can c a universe such that

its share of wood the sound is dense and deep even a vacuum, meaning a predominance of severe and sustain good
I put on it because it will take nine symbiosis between a universe and a lag that will be perfect!

Being in a neo classical metal style she completely agree
Only micro lacks some precision in the extreme (severe drooling in the "whistles" in the acute) not too much concern for the parasitic cavity are treated graphite
the selector can be able to have a pannel of sound change, combine to push pull c almost infinite!

having a neutral EQ sounds are clear, we can in splitter is similar to a Start (I said we can!) the neck pickup sounds good fats good for jazz! (C although not his calling first!)

a black dot on a small detail is used in the shooting 10-46-58 (a little balèze Si) I would have preferred a normal 10-54, but good strings will ca change!
ps: when I test it with a Marshall amp AVT50 (my friend) have no effect on the clean channel and drive

I had this instrument aujourd'huit and I am very satisfied!
has again without hesitation!
I always possesses despite several 7-string
(1527.7321 ibanez, universe, s7320, Jackson DR7) and will arrive in good 2nd behind the universe (but really because the c mr vai guitar!)
a very playable guitar elegant versatile and easy to adjust (after each trip I control everything on the guitar!) one of my favorites no doubt
I wait to have stephan forte hands to face the universe and that it

for the price of the time (approx € 2000) was a very beautiful instrument with a violin impeccable, reliable and versatile enough that can be improved very simply!
Did you find this review helpful?yesno
»

See all 7 photos of Lâg The Beast Seven Pro »