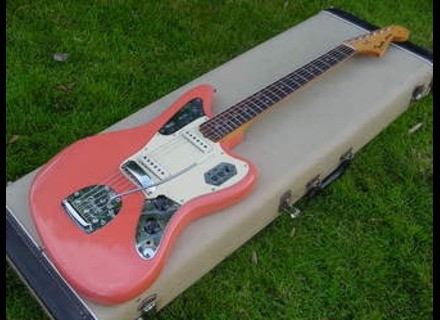 Jaguar [1962-1975], Electric solidbody guitar with JZ/JG body from Fender in the Jaguar series.

I was in a local music shop and saw this marked down from $1100 down to $599. That was a steal for a nicely crafted in Japan Fender bass. I think that is the same price that a made in Mexico Jazz Bass costs.

The block inlays, matching headstock and extra chrome like the old Fender Jaguar guitars give this bass a really hip look.

The neck, nut and string spacing are identical to a Jazz Bass.

The electronics are in my opinion overly complicated. You have two pickups, a master volume and tone, an active treble and bass boost as well as on/off switches for the pickups.

This could easily through you for a loop and is a bit daunting at first. You'll get the hang of it eventually, but yikes, they could have made an easier control layout.

The bass looks awesome. It plays and feels like a Jazz bass. Fender Japan has always put out a decent instrument. The body is made of alder which gives you a very Fender-y tone, the neck is a hard maple and the fretboard on all of the Jaguars is rosewood.

The pickups are the pickups that go in a Jazz Bass.

Bottom line is the Jaguar Bass gives you the classic sound of a Fender Jazz bass with added style points for looks.

Where to start, well, the colors that come with it are awesome. The tone is even better, nice and twangy. I also like that you have complete control over the pickups and their volume with the guitar, which is really cool.

There are exactly 2 things i would change about this guitar. 1, it is kind of heavy, but its not heavy to stop people from buying it heavy. 2, the bridge is a real pain, just get the lighter gauge strings, and you should wipe out that problem.

Well, i bought it damaged new. And it sounds way better than any guitar i have played undamaged new. Again, the bridge stuff kind of gets loose, but it only gets in the way of palm muting. So, its no big problem if you are just playing like a 6 hour gig. (who plays gigs longer than 2 hours though?)

Bottom line, get this guitar if you like twangy noise. But let me go further, if you are considering not buying the guitar because its production was so short, let me enlighten you. They quit making it because people like Hendrix and Buddy Guy were all using the strats, and the strats were selling. Then, the 70s came, and surf music was completly wiped off the charts, so the jag was really not selling. It was a marketing reason why they dropped it and not a technical reason, so again, GET THIS GUITAR, IT ROCKS!

Fender Jaguar [1962-1975]
5
I got this guitar from www.GuitarStrings.co.uk for a very reasonable price of £500. I got it because I love the shape and the style of the jaguar.

There are tons of things i like about this guitar! Firstly I love the shape (as i said already). Its so retro but classic at the same time. I love the playability of it. Its so easy to pick up and play. Another thing I love about it (that I was surprised by) was the weight. Its very light yet it looks chunky. Yet another plus about it.

The only thing I dont like about the guitar ( emphesis on "only") is the fact that the knobs and things arent labeled. I suppose if they were, it might take away the atractiveness of the guitar but it would make it a whole lot easier to get the sound you want. Theres so many little things, you dont now what to do.

The construction of it is great. Very nicely held together except form the one flaw. The whammy bar thats connected to the bridge falls out! Its not connected by twisting it like a strat, it just slots in. This isnt really a porblem to most people though. The quality is fantastic.

This is an amazing guitar thats very worth considering buying. It plays fantastically, its light and it looks impressive too!

the action is far to high, this guitar hardly sustains at all, the hardware feels cheap, the bridge is built poorly, jack lead cable loosens easy, screws in bridge undo when playing, very heavy, the tremolo system

i would almost beg u 2 not but htis guitar i was so un happy with it i managed to take it back and get a full refund, i spoke to fender and asked them why there were so many problems and they replied ( we ave taken the same design from the original in 1962)and there not gunna change it . please dont but it save a couple hundred quis and but a strat or les paul cant go wrong there