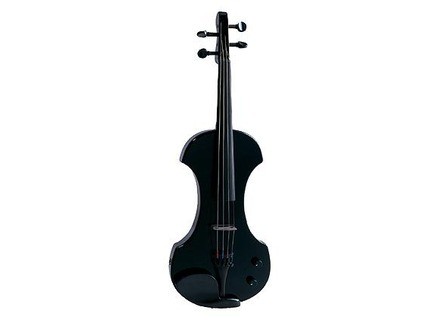 FV-1 Violin, Electric Violin from Fender in the FV series.

Fender FV-1 Violin
4
This is an electric violin. I am not much of a violinist but I have a friend who is, and I asked him to try it out after I did personally. First I tried it, and I immediately noticed that the bow that comes with this instrument is lackluster at best. When I borrowed my friend's bow, I found I had a much easier time playing it. The tone when unplugged is very lifeless and scratchy, not a great acoustic instrument. I found I had much better luck when I plugged it in. At first I tried my Fender twin amp, and I found that I didn't like the sound (it really made me sound bad, all the flaws were dramatically highlighted). It's better with acoustic guitar amps, they don't color it the same way an electric guitar amp does, and they'll respond better to effects and manipulations than an electric guitar amp would. I could tell that there were a lot of flaws with the instrument, as there wasn't a lot of room for tone control or anything like that. I found that once my friend played it, it sounded far better, simply because his tone control is way better. He too, however, had some of the same complaints as me. On the other hand, it's only about $250. For such a cheap instrument, I can't even describe how good it is. I would say that anybody not looking for a beautiful, rich sound, but is rather more interested in producing foreign or unusual textures (think George Crumb's "Black Angles") or is looking for crazy sounds like Warren Ellis or John Cale are used to doing, this might be a worthwhile investment. Keep in mind that you'll need a ton of effects to really get your money's worth, assuming this is your end goal. If you're looking to play stuff that's closer to traditional violin sounds, you'll have to invest in a higher quality instrument. However, for $250, this isn't bad even as an alternative to an acoustic violin. While I've found cool uses for it, I don't think I could recommend to anybody immediately, though I would suggest that they check it out.
Did you find this review helpful?yesno
»

Fender FV-1 Violin
2
(Originally written by pagamini/translated from Audiofanzine FR)
I bought it secondhand and used it for five years. It was my first electric violin.

This instrument has a sound box. Thus it quickly generates very unpleasant feedbacks as soon as you play with distortion. But given that it has a sound box, it produces a much warmer sound than a skeleton-type electric violin.

The manufacturing quality of the pickup is very bad. The wires move and create unwanted noise (or even signal drop-outs) due to the instrument's vibrations. If you open the small plate you'll see that the pickup wiring is very bad.

It's impossible to use this violin live on stage because it's much too unreliable.

It's a pity because it produces a warm and interesting sound...
Did you find this review helpful?yesno
»

maxewantstrass's review (This content has been automatically translated from French)

Fender FV-1 Violin
5
I use this violin for a year and a half, it was the first time I played the electric violin since I was 13 years of violin. At first I was a little disappointed with the sound, but once all the chords change, and buy a tube preamp, the sound was really clean. In addition, it comes complete with bow and rosin box (although the latter two are the same as the strings ... is a stab at ...). I think the FV1 Electric Violin is the first to buy, and then with experience and as required, we must turn to more sophisticated violins, like the Yamaha.

Malcolm666's review (This content has been automatically translated from French)

Fender FV-1 Violin
4
It's been a year now I play with FV1, and I notice a little lukewarm to departure. But since I changed the strings (I prcise I mount mine on alto) and the bridge too, because the original is a real dung, and the sound is totally transformed grain superb no noise, a real personality and I expected anything but a given as the price range! Trs a good electric violin, but if one takes the trouble to change the bridge.
Did you find this review helpful?yesno
»