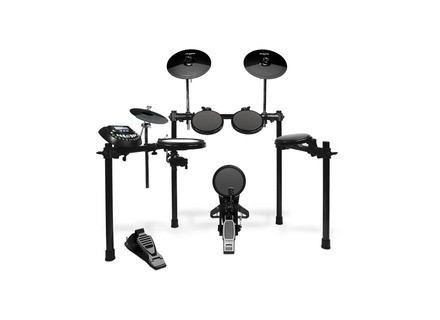 Alesis DM7 USB Kit
4
Bought new in the U.S. for $ 542 (390 euros), we can say that it is not too expensive.
I took six months of classes 22 years ago and I have not played since, so do not expect advice from an expert. I have been using it for a few months now.
The build quality seems very good, and the assembly is relatively light, given the size of the product.
The sticks, stool and kick pedal are NOT provided. So I bought a Pearl P120P secondhand for $ 38.
The rebound is very good, much better than on other more expensive units IMO, whether on the snare (3 zones: rimshot and circle over the skin) or the toms.
The crash works very well, and has a choke: nice feature.
The Hi-Hat pedal is well made and works well once you know what you're doing.

At first it did not seem to register all the hits and the hit level varied a lot but after a few weeks it either started to work better or my playing got good enough. Need to tap it in a specific place for it to work well, though, the whole surface is not usable.
The ride works well but has only one zone apparently.
In short, if you want it to be a great kit you'll need to consider buying real cymbals and a real hi-hat, and i personally miss having a splash. But for playing over CDs like i do, this is FANTASTIC FUN, i play sometimes for 2 or 3 hours a day and i am LOVING IT like you have no idea.

Some sounds of the module are not bad but most are pointless so i would recommend using the USB feature and trying some software for better sounds.
The MIDI "songs" sound terrible and are very "Fisher Price" ... I do not see myself using these songs in ANY way, much better to use your own MP3s or CDs.

Editing: The sound is easily modified: sample, volume, pan, reverb and pitch. Saving the edited kit is very intuitive.
The overall volume is adjusted by a very small volume knob behind the module: i would have preferred to have one fader per instrument on the front but in practice it is not a problem. However, what IS a problem is the hiss and low level of the outputs, on both the headphone and line outputs. There is a USB output that should remedy the problem when you have a PC handy but one should be able to make music in good conditions with just this module and no PC or mixer or anything else: for playing live it's ok but if you record you'll need to dehiss your drum tracks for sure. I have a cheap little Behringer mixer bought used and it helps out to play over MP3s but I should not need it. There is a line input for mp3 on the module but given the low volume it is hard to use. It should have a digital output.
The module is less basic than the DM6 but is still really very basic so expect fun but not professional sounds or quality, for that you will need to use the USB and special software.

Finally, the kit was delivered to me incomplete: missing 3 screws and bolts fixing clamp. I contacted Alesis Support (Numark) and they responded with amazing speed and I was immediately sent the missing parts, which arrived very quickly. That is very reassuring and after several month of heavy use the kit is still almost as good as new and works even better than it did out of the box. And i've been hitting it very hard sometimes!

Overall i HIGHLY recomment this kit for beginners or for any drummer who cannot have a noisy proper drumkit at home, or simply for anyone tired of using a drum machine on recordings and looking for more realism: the USB port should be great for that.

I am very happy with it and i think it is great value.
Did you find this review helpful?yesno
»

deun67's review (This content has been automatically translated from French)" Good start but ....."

Alesis DM7 USB Kit
4
I bought new and I use it for a week.
I had tried two or three other in-store
Goodies:
Strong, easy to assemble, good impression to start. Its not bad but as soon as you plug the USB EZDrummer, it's hard to go back to the original sounds that sound still frankly 80 years.
very good feeling about the game pads.
Snare well done
Cons:
The backlight turns on and off as he wants .... shame about the price.
Pieces of zic to fully train to pick up. Midi sound worthy of the Bontempi organ from my childhood ....
The eighth of the open hi-hat is often stifled in the bass drum strokes, damage to the metal.
Charley pedal not very accurate.
Surface of the pad rather fragile (I have already marked one while traveling.)

In short, much better than the DM6, but I think I will soon regret the € 300 which separates a Roland (not the HD1)
Did you find this review helpful?yesno
»

1 Published on 11/17/10
Alesis has announced that the electronic drum kit DM7 is now available for sale and shipping.