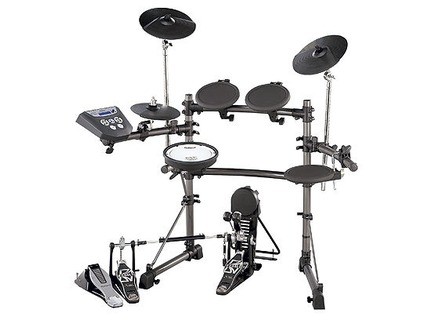 TD-6KW, Electronic Drum Kit from Roland in the TD series.

All user reviews of 5/5 for the Roland TD-6KW

Average Score:4.4( 4.4/5 based on 10 reviews )
Value For Money : Excellent
Not satisfied with those reviews?
Our members also liked:

Gerauld's review (This content has been automatically translated from French)

Roland TD-6KW
5
- I use it for 1 year and a half homestudio.
- The best: The MIDI connection allows, before recording an audio track DEFINITIONS, to be able to edit the sound made when the taking. I also like the edition of the instruments and snare drum sounds.
- The least: touch as many batteries Electronic ... Ideal for training and composition work in home studio.
- MODELS I tried several before you buy.
- Good qualitprix.

I do it again this choice without hsitation.
Did you find this review helpful?yesno

kiksp's review (This content has been automatically translated from French)

Roland TD-6KW
5
I use the TD6KW last week's record at the top.

The +: sounds like the CD is really just tore realistic!

le-: as some have said, because m ^ me with the headset means the toc toc toc cymbals but is still acceptable given the right sound and touch it has!
to see if the effect is the m ^ me on the cymbals that are highest in the range ...
before buying it I tried that and the td12 but I know the reputation of this drumkit is no longer Digital has done as well as in its realism and especially price! it is affordable unlike before where I dreamed to have one!

stroke experience this choice I would do without hesitation and if I had more as I took the td12 but it is not given! otherwise the td20 + k offering really good but 5000 euros must be really a pro! I play for 10 years the e td6kW conviend me perfectly!

PS: I sold my acoustic drums for this one for lots of good reasons, ok good live feared but hey I'm not going to live on by the one second I can be acoustic drums though ...
Did you find this review helpful?yesno

Ninjafab's review (This content has been automatically translated from French)

Roland TD-6KW
5
I started buying this a month ago. I do not regret and I am happy with my TD6-KW
But first a primary focus!

Stop comparing the acoustic and electronic drums. There is no comparison! It's like comparing an acoustic guitar to electric guitar:

- It is not played like;
- It does not have the same sensitivity;
- The plugs directly into a sound system, not necessarily the other, in short, ..

I have a little tired of hearing the so-called purists tell me that this is not the same: YES IT IS DIFFERENT! Completely different. So much so that I'm working on an acoustic and I play with electronics avecmon group. MORE EASY TO ADJUST, EVEN MORE OPPORTUNITIES FOR EVERY PIECE ... Voilou
Having said that move to the critical

+ What I like:
- Bank of realistic sounds
- Weight and maneuverability for easy transport hyper
- The game headphone n'emmerde person!

What I like -:
- The Charleston pedal requires an adjustment period ... Learn to use it.
I tried the TD3 but it did not have opportunities to sounds of TD6. Yamaha in the same price for the delay and other marks are well below-rate care.

For € 1390 I had the complete package with stool, sticks, pedal. Price / quality ratio very interesting in view of the range of possibilities of the module.

With hindsight: YES, I remake the same purchase
@ +