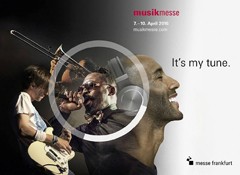 Along with NAMM, the Frankfurt Musikmesse is the world's leading trade fair for musical-instruments, music software, computer hardware, sheet music and accessories. Musikmesse has been an important meeting place for the musical-instrument industry for over 25 years. The Audiofanzine team will be reporting live coverage from Frankfurt during Musikmesse. Stick around for exclusive news, videos and photos.
Musikmesse 2010 Rumors

Here at Audiofanzine we go to great lengths to give you the latest Musikmesse rumors from around the net.  Disclaimer:  these are rumors, unsubstantiated, not press releases.  Proceed with caution.

Spectralis: Jorg Schaff said on the forums "...at the moment we are working on a new product that will be presented at the Frankfurt Musikmesse.  No - it's not a Spectralis 3 and it's not a Spectralis keyboard version. But it is a very special keyboard..."
ART: is said to be unveiling a new eight-channel input / output expander, that they said would be ideal for “any ADAT light-pipe equipped audio interface, direct-to-disc recorder or DAW".Steinberg: Wrote on their website that they will be "unveiling two eagerly anticipated applications that will create a lot of buzz".Elektron: is rumored to be introducing new gear, having booked a booth at Musikmesse (which they did not for NAMM).
Toontrack: is definitely going to release some software, there are lots of hints and cheeky teases on their site...
Universal Audio: Said on Facebook "getting close to releasing one of the most jaw dropping "tone box" plug-ins (and incredibly complex modeling projects) in UAD history. Excited and tired."
Gibson: Will the eagerly anticipated Slash Appetite for Destruction Les Paul finally be unveiled?  We hope so!
Taylor: Are rumored to be releasing a 12-Fret guitar as part of their standard model line-up. For the first time, they will be announcing the Dave Matthews Signature Model guitar.