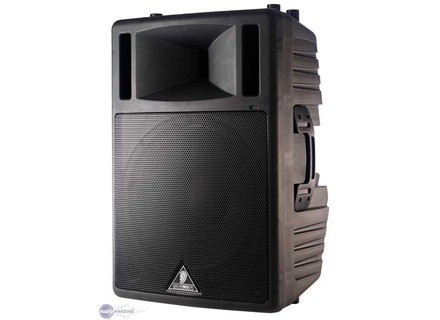 Eurolive B300, Full-Range PA Speaker Cabinet from Behringer in the Eurolive series.

Value For Money : Poor
View other reviews for this product:
- How long have you use it?
I use it for 4 years ..
I chose this system for not having to carry around an expensive amp and passive speakers disproportionately large ...
- What is so special that you like most and least?

no strength in any case ....
it farted twice while the tweeter that is more respectful (très..) of gear.
then the two screws that allow the feet to turn LOCK ds vacuum ..
in sound is worse than the jbl das or even of the same ilk.

anything negative, the sav France is provided by a single repairman who is in Lyon (OXYGEN)
little involved and very proud of the card ...
behringer asure that it specializes ds Chinese .... not serious, we defend the colors or the card is stopped!

Bin there, it's always good.
of his drinking on the cheap ...

little trick that not gd world knows not found the tweeter is the same as the LEM.
much cheaper, I got it for 20 euros.

not because the sound is the thing with which it must be less stingy ....
See the source
Did you find this review helpful?yesno
Cookies help us improve performance, enhance user experience and deliver our services. By using our services, you agree to our use of cookies. Find out more.