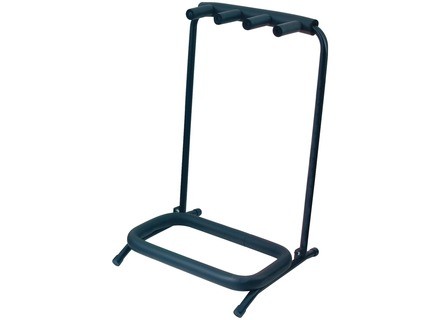 RockStand RS 20860 B/2
2
This stand folds whose base is made in China. It is sold at a very reasonable price to store three instruments (rather than electric guitars because of the small space between each place).
Upon assembly, I had to play because of a drill hole off-center making it impossible to screw the whole. That said, this stand mainly suffers two flaws that add:
1) tubes section is square, so that angles threatening enough to polish the guitar await a wrong move on our part to attack our instrument
2) the protective foam around the tubes is not dense enough, then it crashes fairly quickly under the weight of guitars (almost always positioned in the same place) to allow flush ... the famous corner, lurking in the shadows!
In short, it is Rockstand a cheap product, but not enough evolutionary practice, where caution should be putting his equipment. A book for occasional use on stage for example.
I recommend instead to opt for the model Hercules Stands GS523B more expensive but made of round tubes, with excellent protective foam and which you can add one or two extra seats thanks to the ingenious accessory HA 205.
I replaced my Rockstand by the Hercules model to store a bass, two electric and electro-acoustic wouldnt back!
Did you find this review helpful?yesno
»