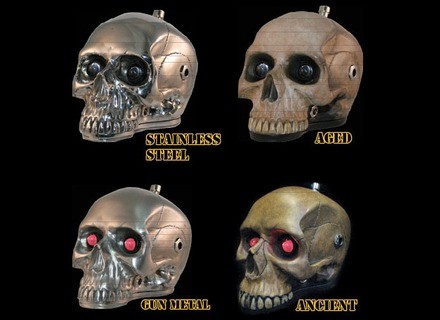 All user reviews for the ToneBox Skull Crusher

ToneBox Skull Crusher
4
Skull Crusher is totally unique in its look and it comes in four different finishes: Stainless Steel, Gun Metal, Aged, and Ancient. A lot of care is taken in getting the finish of the pedals A stomp switch is located at the top of the skull. When you switch the pedal on a blue LED facing you turns on and the eyeson the front of the skull shine red. The input and output jacks are in the ears and below one of the ears there is a turbo button. The controls are on the back of the skull. The controls are a 4-way Voicing knob, a Tone control and a Gain knob.The voicings are labeled Clear, Ice, Chains and Body. Black knobs with white pointers clearly show the position of each knob from a distance.

This is a cool pedal and it is guaranteed to get some attention in your pedal board. Some people may think it is a joke or something but you can assure them that it is a serious pedal with serious tone. I recommend using it with the turbo button on at all times. If this came with just the turbo mode on I would like the pedal even more. Some people looking for the lower gain stuff that you would use with the normal mode on probably wouldnt buy this pedal to begin with so I dont really think that versatility is needed.
Did you find this review helpful?yesno
Cookies help us improve performance, enhance user experience and deliver our services. By using our services, you agree to our use of cookies. Find out more.