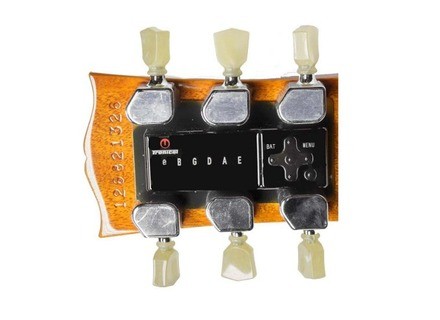 Pakadoudou's review"In theory it's great, but in practice... It's rather mediocre"

Gibson Min-ETune
2
I installed it on my Epiphone Les Paul Ultra. The installation was easy, the system integrates perfectly and it doesn't stand out in relation to the rest of the guitar.
Installing strings is pretty straightforward. But pay attention when tightening, so you don't overdo it, the internal mechanism could break.
It is relatively easy to use once you've understood how it works, after reading the manual.
Changing tunings is done relatively fast. It's nothing like on the promotional videos, but it's faster than doing it by hand.
The problem is the precision of the tuning, it's very poor. There's no need for a tuner to notice it, anybody could hear it right away.
So you need to finish the job by hand. A pretty expensive product to end up doing it all by hand!
Did you find this review helpful?yesno
»

Gibson Min-ETune
2
It came installed from factory on my Gibson Sg Standard.

I got it as a family present this last July.
I didn't know this product, but I found it really useful at first.

First point: In terms of tuning, it's better if you tune two times, because the first time it's not that precise, even if it's not bad.

The second point is more important: The tuners are very fragile, so you need be careful when you change strings. But that's not all, twice I've had a tuner blocked while simply tuning. I haven't had the time to change strings.

I play open tunings a lot, so I use the tuners quite a bit, but this product is made for that, isn't it?

So, replacing the tuner in question poses not a problem, because they can all be taken off independently. But finding the tuners for this system is a job in itself and I'm still not done!


If I had to choose today, with the little experience I've had with this tool, I would go for classic and manual tuners, given their fragility and price!

I think they are inadequate. If the system works it's great, but if one of the tuners gets blocked, then it's game over, you won't be able to play your favorite instrument.
Did you find this review helpful?yesno
»

Gibson Min-ETune
5
I bought a Tronical system (called "mini etune" on the 2013 Gibson range) from an online German store to install it on my 2004 Gibson Les Paul Std. I Had to file the headstock holes a little bit to mount it but no big deal. Setup instructions are clear and the result is simply amazing. It is user friendly and you can switch from Drop D to E flat, DADGAD, Open G tuning even custom (the rain song from Led Zep) in A Few seconds. It is adding a little 100 gr to the headstock vs the original Grovers tuners. Like a lot of stuff, this is not essential but it is damned usefull!

See all 26 photos of Gibson Min-ETune »

View all 6 videos of Gibson Min-ETune »