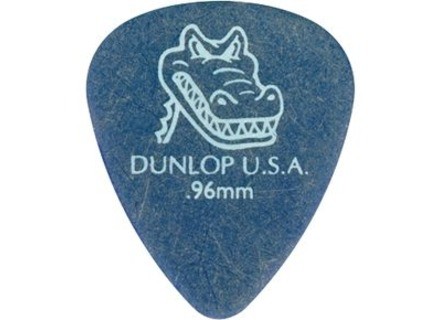 All user reviews for the Dunlop Gator Grip

Average Score:4.8( 4.8/5 based on 5 reviews )
Not satisfied with those reviews?
Our members also liked:

Dunlop Gator Grip
5
A while back when I went into my local music store of choice, I asked for some really heavy picks because I wanted to try something different besides the .88s I was using. I've since used these picks for probably close to a year now, and I haven't looked back. They are great for the genre I play, which is mainly Thrash metal with some drop-tuned stuff thrown in. It gives a really aggressive feel to your playing, and the precision the heaviness allows since it really doesn't bend at all is great for leads or complicated riffs.

Now, if I mainly played acoustic, or electric with big. clean, non-distorted chords I probably would stay away from this pick, because it gives a very quick and fast attack that. in my opinion, doesn't fit that style that well. It makes this a little harsher than I prefer, which works out great for metal, not so much for acoustic and the like.


Now, what don't I like about it? Well, it doesn't always seem to stay put in your fingers as well as some of the others. What I mean by that is that it can rotate around somewhat, which can be annoying on stage. It IS harder to drop because of the somewhat rough surface, but it isn't as... grippy as some of the other Dunlop picks.

I think I am going to try out the Jazz III's next, and they have a uber-grip version of those, so that will hopefully solve my problem with picks slipping around.

Dunlop Gator Grip
5
The 2mm Gator Grip pick has been my preferred pick for many years. I was able to quickly find what kind of pick I liked. I first started with the Green 88mm Tortex picks that many people love. I liked the size of the pick but they were not stiff enough for me. The Tortex picks had a bit too much flex for me. If I was a mainly acoustic player I probably would still be using them. I could not get enough definition when using these picks. I then tried out some Jazz 3's which a lot of my friends use. I loved the stiffness of the pick and the sharpness of the top. With the Jazz 3 I got a really sharp attack and nice clarity with the sound but the pick was so small that I would drop them easily or they would turn around in my hand. With the Gator Grip 2mm picks I guess everything I like with the Tortex picks and everything I like with the Jazz 3. The 2mm is very stiff and is coated with this strange non slip surface. It is like sandpaper but it will wear off after a few days of playing. The picks are as big as the Tortex picks so I do not drop them either. They are moderately sharp but could be sharper. This pick gives a unique feeling as it goes across the string because it is so thick. It does not really bite into the string like a Jazz 3 does it kinda glides across it once it is broken in. When it still has the sandy surface on it the pick kinda rubs against the string like if you are using a coin. So if you are into really heavy picking and want a pick that will stand up to the toughest riffs I recommend the Gator Grip 2mm.
Did you find this review helpful?yesno

Uncensored's review (This content has been automatically translated from French)

Dunlop Gator Grip
4
I bought 1.5 mm thick reference picks for my guitar, and I was very disappointed ... The attack is non-existent and ca balance a tad too serious for this attack said ...
But on the low changes everything, it's really low mediator par excellence! A smooth attack, and the grainy texture of the pick can not drag on too huge wound strings of the bass!

But I prefer bass with the fingers ^ ^

So I put 8, as objectively as possible for me because subjectively, I do not like the guitar to plectrum which is my instrument prédiliction ^ ^
Did you find this review helpful?yesno

Dunlop Gator Grip
5
A year since I looked at the crocodile, not disappointed! A mediator who facilitates my solo games, I use it in 2mm, as harmonic without effort, the pure happiness that does not slip! Its only drawback is that heavy use, it wears out very quickly (in less than 1 mm at the tip of a repeated!) But hey, it's still the non-consumable?
Did you find this review helpful?yesno

rogercag's review (This content has been automatically translated from French)

it has become my mediator reference, I have jou in 3 mm (dunlop big home) too bad I wanted to return to something more reasonable ..

Finally, I like the look of the plectrum!
Did you find this review helpful?yesno
Cookies help us improve performance, enhance user experience and deliver our services. By using our services, you agree to our use of cookies. Find out more.