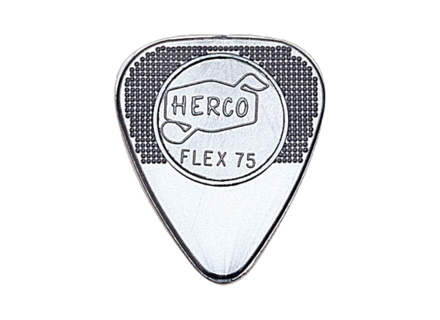 Herco Flex 75
5
The Herco Flex 75 is a simple nylon guitar plectrum, or pic as they are more commonly known as. While I usually don’t mess with my formula when it comes to picks, I recently had no choice and had to use one of these. I’m definitely not complaining since I found that I really enjoying playing with this pick. In general I tend to use smaller sized picks like the Dunlop Jazz Stars and even though I usually carry one of them around, I didn’t have one on me when I was presented with the Flex 75. The Herco Flex 75 simply feels great in your hands. It’s nylon so getting a grip isn’t hard and holding onto it is even easier. This can be somewhat of a problem at times with other pics that don’t have any creases on them like this one as it helps to keep the pic in your hand for sure. Pics are definitely all about personal preference and although they can change the sound a little bit depending on what the pic is made out of, it’s most important that you feel comfortable holding it in your hand and I think that most players will feel good with the Herco Flex 75. The price is a bit more expensive than most other pics for whatever reason and I don’t know about the availability of these in stores since the one I’ve used was in a studio already. Even though I enjoyed playing with it, I definitely still prefer my smaller pics. I’m curious to see if Herco makes anything like the ones I’m currently using as I like the feel of these pics but I would ideally like something smaller. If you are on the quest for the perfect pic, the Herco Flex 75 shouldn’t be overlooked.
Did you find this review helpful?yesno
»