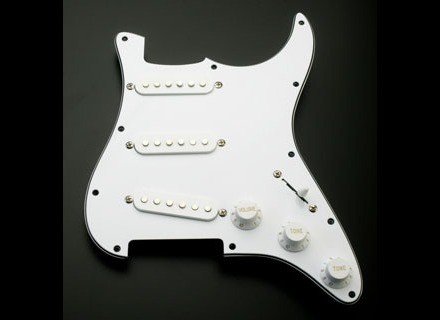 GFS Wired Strat pickguard 3 staggered pickups TONE J01
5
I possde a Fender Stratocaster Japanese c'tait Premire my guitar and also a low-end guitar, the sound was no ordinary characters in short personnalit.je without warning me this guitar because it t given by someone close is dcd. regulirement I played with, the guitar has not aged badly but especially at poorly electronic, I even micro acute that let go, I wanted to update this guitar but a single shot. I came across this product type fender plate Fully assembled cable and there are just over the jack and the ground wire of a welding vibrato and of course has put the screws!

For the cons I pierced some holes with a plate MODEL oldest possde screws but less good in my c'tait SPECIFICATIONS MODEL! Start the other is the right number of holes for the screws.

the plate is composed of three single coil pickups gfs alnico staggered the same manufacturer, a selector 5-way micro and two good quality of tone and volume in all 500 k!
assembly is very well done, fine welding is clean, the son attached safety wire on the plate and the microphones made in the brief rules for the art.

all expenses paid for 45!

good at this price we ask the questions, me first!
I weld my little son, I ride my plate and I put the strings.
Vrit time, I plug the amp turn on .......

Well, AMAZING!
trs sound is good, I'm bluffing, no parasites on the selector.
I thought finding the same type of sound before and well NO!

It's really the sound of a START in the strict sense of the word!

I ask to compare the American Standard Stratocaster buddy, copy and paste it, even her bluff t especially when I told him the price!

is simple and cheap to update its strategy or official copy, especially since the sound is even better for what have copies!

I buy several products at home and that the manufacturer has the best quality price ever!
I recommend this product highly trs you will absolutely not, I recommend it even to those who have a real Mexican stratocaster or amricaine and have microphones HS, they will find their sound and cheap!