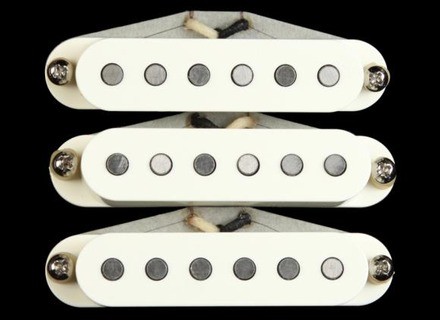 Bare Knuckle Pickups Mother's Milk Single Coil Set
I use it for more than 6 months.

Previously I had never changed the pickups in my guitars and I have not tried others. By listening on youtube the sound of several microphones that I chose this one because I wanted to put two simple microphones next to the double "Crawler".
In fact, I have some strat US on which there were seymour duncan. The sound was okay but goes everywhere.
Since I changed the pickups, it sounds fabulous and has gained versatility.
The pickups coupled with mother's milk Crawler allows me to have very different sounds. The big hot potato with the crawler and sounds very very crystalline or funk depending on the position of the selector. These pickups do not alter at all the sound of the guitar and the game becomes very clear. The value for money is exceptional as your guitar goes into another world. Especially since my stratum is a corona of 90 years so it's not a custom shop

). So I think change all my other guitars microphones for bare knuckle. Especially since the store or Tomawak I bought them at prices very competitive and can be obtained in less than a week. So the choice I would do without hesitation. For now I would give the note of 9 / 10 because perfection does not exist in this world.
Did you find this review helpful?yesno
»