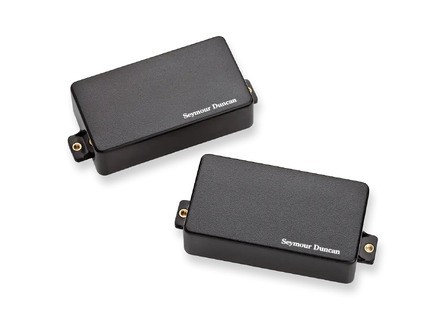 Seymour Duncan AHB-1 Set Blackouts
4
For the longest time EMG's were pretty much the only active pickups you could get on the market. With active pickups they have relatively weak magnets and the signal is amplified with an onboard preamp. With the weaker magnets you can pickup more nuances and the sound is quieter. Seymour Duncan is trying to get into the active pickup market. They have recently introduced their line of blackout pickups and they are pretty much clones of EMG pickups. Seymour Duncan claims that their pickups are quieter than EMG's but I have never had problems with noise on EMG's so im not sure what they are getting at. These pickups come with the black plastic cases just like EMG's and have solderless wiring much like EMG pickups. You can also get them in nickle and chrome covers. With the solderless wiring these pickups are very easy to install. They come with their own pots so there isnt much messy work to do. The bridge pickup unit is very aggressive but has nice bottom end. It has all the top end of the EMG 81 but with more of the bottom and thickness that you associate with the 85. The neck pickup is very fat but with some top end sizzle to add more clarity. With the focus on high gain tone the clean tones are a little lacking. This is a common problem among active pickups. With EMG pickups if you wanted a better clean tone you would do the 18v mod to get you more headroom and a more organic sound. With the Seymour Duncan Blackouts doing the same mod does not change the tone much so you cant really help the clean tone. The big difference between these and EMG's is the extra low end they provide. If EMG's do not give you the thickness you want in your tone you should check out Seymour Duncan Blackouts.
Did you find this review helpful?yesno
»

Seymour Duncan AHB-1 Set Blackouts
4
They Seymour Duncan AHB-1 Blackout pickups are Duncan’s attempt to rival the famous EMGs that have been so well known throughout the metal community as the #1 pickups out there. Just like the EMGs, these feature the same style black cover, quick disconnects, use special pots and the such. They’re truly EMG clones.

The Blackouts come in both neck and bridge varieties. This review should hopefully cover both for you. First off is the bridge – The bridge model is an extremely high output and aggressive sounding pickup. It’s like a cross between the EMG 81’s aggression and the EMG 85’s fatness. They’re fat enough to where they deliver huge bass, but they’re aggressive enough to where they cut through the mix without any problems at all. They’re fairly scooped sounding, but that’s mainly because the bass and treble are increased more so than the midrange being actually pushed back.

The neck model is like a much hotter and more aggressive EMG 85. It’s extremely fat sounding, but it also has some bite to it to help it remain clear sounding under high gain. This helps quite a bit when doing fast note soloing.

Just like EMGs, I’m not a huge fan of the clean tones. Mid gain tones aren’t too bad, but most people who try these are looking at the high gain tones, and they deliver pretty good. Given that they’re active pickups, they’re very quiet sounding, and when under high gain, that’s a big must. However, I can’t help but feel these things have way too much output and too much bass. Every time I go to record with them, I keep thinking to myself that the EMGs just sound better. I’ve tried these in various woods with the same result.

If you’re a fan of EMGs, you probably won’t like these pickups as much. However, if you always thought EMGs were thin sounding and not delivering the tones you’re looking for, the Blackouts are worth checking out.

Seymour Duncan AHB-1 Set Blackouts
5
(Originally written by jaydecham/translated from Audiofanzine FR)
I installed this kit 3 or 4 days ago. I thought it would be difficult with my passive Les Paul Custom since I had to upgrade the whole electronics!

I followed the instructions of the diagram provided and it wasn't difficult at all. If you work step by step, you won't have any problems. I installed and soldered everything myself. When I plugged my guitar for the first time, I was afraid no sound would come out, but it did work!

I was immediately blown away by the efficiency of these pickups. They provide a killer sound! The clean sound is wonderful and the distortion even better. The sound is powerful and well-defined with many natural overtones. I never heard a better sound. It's a wonder!!!

I was surprised by the lack of noise even with a heavy metal distortion pedal, a high volume setting on the amp, and the guitar's volume controls turned to the max! It's just incredible. When Duncan specifies 14dB noise, they don't lie.

Excellent value for money for me because I found them very cheap. For that price, I would install them on all my guitars.

My three other guitars have EMG pickups (81, 85 and 60) and none of them can compete with the Seymour Duncan except for the clean sound of the RMG60. These Blackout pickups sound much better than EMG pickups.

I strongly recommend them for heavy metal, but also for other styles. The clean, crunch and distortions sounds are wonderful with my H&K Tube 50. The sound range is incredible. They are ultra versatile (although it might also have to do with the fact that I have good amps). Don't hesitate to buy them: you won't be disappointed!
Did you find this review helpful?yesno
»

roguewillot63's review (This content has been automatically translated from French)" Puuuuur"

Seymour Duncan AHB-1 Set Blackouts
5
I used recently to replace a pair of EMG 81/85 ESP a Ninja.
Although the EMG 85 stands up very well in the neck position for clean leads and parts were missing a little personality. The 81 I can not hear about is the microphone that sounds too typical and not transparent par excellence. Not enough fishing, not so clean as this, a little bland and synthetic.
In short, I was tired and wanted to stay in the asset (for cleanliness). I was looking for a set of microphones that had a lot of fishing for rock / metal (up to extreme styles) while enjoying a clean efficient.
So, having invested in a Blackout AHB-1 some time ago for a 7-String Squier and being very happy with the sound, I decided to ask a set AHB-1 on my ESP.
And indeed, not disappointed at all! It's very clean, no background noise (in addition to my pedal to the test I went live on the amp). Toc to gain! I went from 7.5 in EMG Fireball 5 on my 100W.
Duncan Announces 6/5/9 in Bass / Mid / Treble for AHB-1. And indeed, with the EQ of the amp at noon the sound is already correct! Refining according to my preferences I found his monumental.
Feel free to adjust the height of good microphones, they are very sensitive to their position and there is no need to make them flush with the strings for gain galore ...
The neck pickup is a sadistic executor, a real butcher! Harmonics which fuse easily, as the big big love! It is clear, it's powerful, it's clean and it is especially super dynamic!
Her boyfriend is very good round and give you clean jazzy sounds great. Coupled with a little slapback delay in, you can have a nice little sound to the old. Funky! For lead, it is a pleasure. It has a sacred character and is rich in media. You will be leaving the mix without worry! It is warm and full of fish at a time.

In summary, the AHB-1 are the assets of Duncan the most effective styles of modern metal! There is still the AHB-2 Metal, the signature emty Mike Thompson of Slipknot and Dave Mustaine LiveWire (which I'm very interested as well).

For those who are tired of EMG, go ahead. For those who want active daring adventure, go for it too! You will not be disappointed!

Did you find this review helpful?yesno
»
Read the 10 user reviews on the Seymour Duncan AHB-1 Set Blackouts »