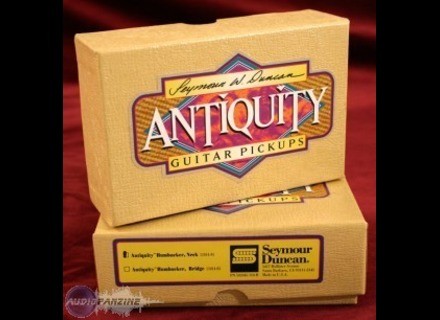 Buy this productView price information >
View other reviews for this product:
I had already tried the same set before you buy, there are three and a half years and knew in advance that it would suit my Les Paul Traditional.
The market is full of excellent replica PAF's and bad too. The peculiarity of these is to have undergone artificial aging while other copies are rather those of PAF's what the time of their youth. Dimarzio also does but I find it terrible.
The result is absolutely stunning, they sound sweeter than the other copies, even at Seymour Duncan. Their output level is normal, there is no question here of super hot.
While this does not mean much, they are alnico II. A pure delight to play super clean to light crunch.
Associated wiring 50's Gibson, I did not know at the time of my purchase, I am even more pleased and was able to remove the treble bleed that I had added to the modern circuit. Can decrease the volume without losing treble not undergoing imprecise treble bleed.
Unlike Les Paul Reissue equipped pickups Gibson Burstbucker pro and extremely expensive, my Traditional provides real sounds vintage to perfection, as if she was 50 years old.
Straight from the States, the set did not cost me much.
They are the opposite of my set Rio Grande boiling hot, just as good to play something else.
See the source
Did you find this review helpful?yesno
Cookies help us improve performance, enhance user experience and deliver our services. By using our services, you agree to our use of cookies. Find out more.