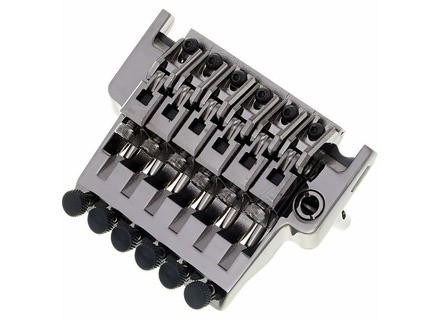 Ibanez Lo Pro Edge
4
This is a great tremolo arm. It's a good sized for my Les Paul, unlike some of the other Bigsby models. I've seen them used on Gibson guitars mostly, especially hollow bodies and customized Les Pauls. I think that this tremolo system is pretty fantastic for many reasons. Primarily, it has far more functionality than the standard bridge tremolo arms that come with Stratocasters and the like. It also keeps a guitar in tune when using the tremolo arm, far better than the Fender counterparts do. Where it gets tricky is when you compare this to some other, newer models like the Floyd Rose. My biggest beef with those Tremolo systems is that they require an absurd amount of maintenance. If you are good at keeping up with this maintenance, they are possibly worth it. This is, of course, assuming that your guitar is realistically compatible with the Floyd Rose. The latter issue has always been a problem for me, and since I'm also not very good at maintaining a Floyd Rose system regularly, it never stays in tune for me.
This tremolo arm has been tried and loved by many great players, including Neil Young, who uses it on his trademark Black Les Paul. I think that may be part of the reason I was drawn to it in the first place, as I am a huge fan of his. I think that it is great in the fact that you can get some great tremolo/vibrato effects with this arm, but are not able to do the cliche "dive-bomb" techniques that some (admittedly great) players use. Considering that those things have been done to death in 2010, I don't miss dive-bombs very much. I just need a basic vibrato to match my left-hand natural vibrato. I think the Ibanez tige is the best option for that. Make sure, though, that your guitar is compatible, otherwise it can create problems.

roro783's review (This content has been automatically translated from French)

Most: keeping the tuning
solid
well thought out (this object)
this provides the DLIR

Cons: finding a supplier for the rings of the stem !!!!!!!
the galre rgler needs to be addressed when
the lack of sustain in use a little push

- Have you tried many other models before acqurir?
The original floyd (with him, no problem of rings as there are not any!)

- How do you report qualitprix?
The prices are a bit because once levs buy it must be done rgler which adds further to the first bill ...

- With the exprience, you do again this choice?
I would do this choice because the floyd allows DLIR out of proportion since it allows its flchissement in both directions while holding the tuning.

For the rating I would not 10 as it enjendre dsagrments some time having a direct action on the strings and inevitably on the game .. I would put this in view of the score of 8.
Did you find this review helpful?yesno
»