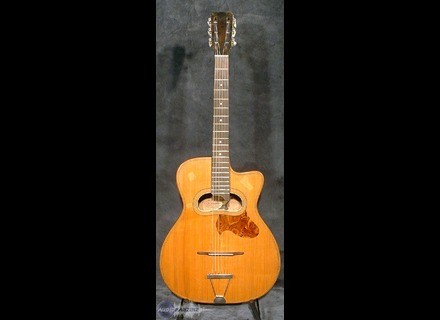 All user reviews for the Patenotte guitare manouche

1 photo
French manufacturing near Mirecourt, Vosges, which should guarantee the quality of wood. Easel just laid on the table, uncompensated, which does not give great accuracy in the treble. The step seems to be there to look pretty, because little access notes and imprecise ...
Channel 46.5, rounded up, little fast. 643mm from the zero fret to the bridge.

Is my first real guitar -1966 - distributed by Pierre Beuscher. Quickly become unplayable as a result of lifting the table at the bottom of the rose, caught after 20 years with clamp masonry ...
You can not play properly in agreements. The shape and weight are correct. The large volume is managed quite well.

The sound was fabulous in the grave, at least in the treble, I remember a scene in 1967 when it covered easily other guitars. With the era of "Argentina" by pulling hard enough, which was distorted.
Now, with the shallow draft usable, it still sounds.

My relationship with this guitar is more than sentimental, I play very little, and despite his makeshift repairs, it is a little slow to play solo. But she still has power, despite the extra light strings that I can do to prevent it from re-deformed.

This is my first real guitar -1966- distributes P-Beuscher. Quickly became unplayable due the uprising of the table at the bottom of the rose, caught up with after 20 years with clamps of masonry ...
One can only play correctly agreements. The shape and weight are correct. The large volume manages quite well.

The sonority was fabulous t in severe, acute least, I remember a scene in 1967 where she easily covered the other guitars. With the era of "Argentina" of pulling hard enough, what has dforme.
Now, with shallow draft used, it sounds again.

My relationship with this guitar is not that sentimental, I play very little, despite his fortune Repair Tool, it is still a bit slow play solo. But she still has the power, despite the extra light strings that I can do to avoid it is re-dforme.
Did you find this review helpful?yesno
Cookies help us improve performance, enhance user experience and deliver our services. By using our services, you agree to our use of cookies. Find out more.