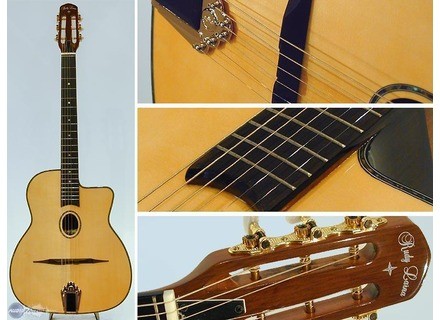 Rudy Larna WM700A
5
This guitar is a copy of Selmer guitar (Django Reinhjardt CHRE Nagar, Christian for all ajoud'hui: PRS 15000 Eurosau low word). The neck is mahogany, rosewood fingerboard (?), The table pica massive back like wicker covers are Rosewood plate (such as real Selmer is the secret of his "pot" ). The neck has 22 frets, there is a pan shot. There's a pretty prsence thread around the box, faux pearl. There is the same around the sound hole and that is unfortunate because it undermines the resemblance to the originals. The tailpiece is nice, but in style. However, the bridge rests on the table of any length, but it is not difficult to remdier. DEFINITIONS As it seems too new and it is conceivable that the instrument will be best to have APRS t skate in years.

The handle is quite pais, it is closer to that of a classic folk hands is common on this type of guitar. Access in acute is correct, given that this is an acoustic guitar. The action is high (one could play the bottleneck) and that takes time to adapt, but it frquent on this kind of instrument that requires a set muscle. The mcaniques seem to be correct with respect to the holding of agreement. However, I find their dmultiplication too long, it is not to agree ais prcisment trs.

The sound is in the spirit, if changing the strings against the Argentine origins. In addition, you have to play in the style: in order prs of the bridge, and not with a plectrum sheet of cigarette ... If we respect that, we get the sounds typical of this type of instrument: a dry and warm enough yet, low in harmonics, but ultimately endearing. Do not hsiter "kick it". These guitars like to be malmne. The Rudy Larna should therefore all guitarists who want to play the gypsy (it's very popular), but also those who want to accompany a waltz with other lctrique who swears so much as a fly in a soup of vegetables.

I use this guitar for a month. I'm satisfied with TRS. This is not an easy instrument in that it requires an adaptation of the game, but all that APRS is harder than playing guitar for a classical musician folk ... Even if it comes from China and not France as any self-respecting gypsy guitar, I think it is all in the spirit Bohme with its low price. I do not include musicians achtent a gypsy guitar with solid rosewood 6000 Euroset who dare not leave for fear of scratching it. I pay 320 Euros this guitar (on sale) and I find his Manir, as endearing as Gibson. It is certainly not perfect, but its default attack quickly forgotten when the standards of the genre: Minor Swing, Swing Waltz, Montagne Sainte Genevive, Indiffrence, Passion ... I am not 10 because the fingers are not Matelo Ferret comes with ...