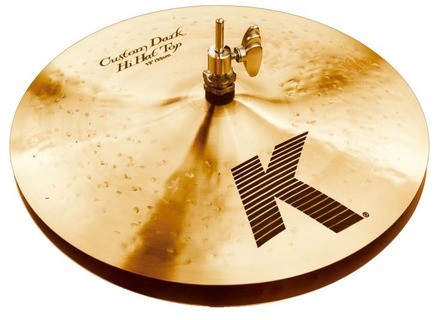 Zildjian K Custom Dark HiHats 13''
5
I started playing drums with a pair of Zildjan ZXT (cheapies) and thought they were good enough. After I used them on one recording, I realized they were far from good enough. I searched around and picked up a pair of the Dark K HiHats after reading some pretty good reviews. I was not disappointed. What I like most about these hats is they are surprisingly full sounding without any of the "tinny" sounds I would get out of the ZXT's. It almost sounds like you are hitting a larger cymbal because they sound so full. I also noticed after the first recording with them that I didn't need to "Treat" them nearly as much as the ZXT's. I just did a slight cut in the lower frequencies, through it in to the Reverb Bus with the rest of the cymbals and that was it. Super easy and super clear. I paid only $200 for a used pair. I believe they go for around $350 new. Either way it's a great price for such a quality set of hats. If all my drum gear was as easy to sit in the mix, I would save so much time, and that alone would justify the costs. Also, every drummer that has come into the studio has remarked positively about how much they love these hats. The quality of the sound is very good as stated earlier. Even the Bell shot is worthy and will beat out any lower end Ride's Bell shot that I have ever used. I mainly just used the cheaper ZXT's but I have also played on some nice Sabian's and was on the fence about buying those or the Dark K's. I'm glad I went with the K's in the end as all my recordings now have a very clean, tight hat groove. Yes, I highly recommend these for players all the way from Metal to Jazz and everything in between.
Did you find this review helpful?yesno
»