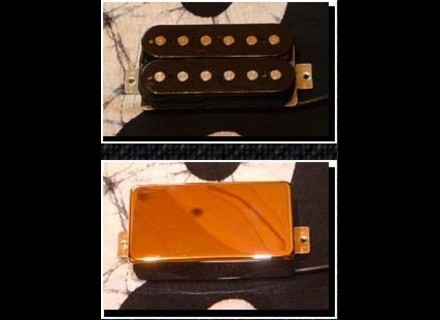 BG Pups HellaBucker Bridge
4
This is a humbucking bridge pickup, made by a small company in California. They are custom-made pickups, according to their website, using only the finest materials and parts. I must say that these pickups do replicate the vintage sounds of old. In fact, I very often hear of them being used in Les Pauls and other hard-rock oriented guitars.
I would have to say that these pickups sound best in Les Pauls and SGs, and that they don't really work in the Strats and Tele-style guitars as well. This is because they are warmer and thicker-sounding, and they don't really complement the high-end of the strat.
I would say that these are great pickups, because they certainly are. However, I can't help but feel like I sound very similar to other guitar players, and less like myself, when I use these. I've put them in my Les Paul and I liked them, but not as much as the humbuckers that came with that guitar. I felt like all my playing sounded sort of the same, and that it didn't really sound as good through a Fender Twin as it did through a Marshall. Now, granted, I known Marshall amps are solid, but I am a Fender guy and I want my guitars to sound good through those amps as I like the high end. I didn't get enough of that with this pickup.
I would have to say that if your taste lies in hard rock and metal, this is probably the best way for you to go as far as that is considered. Most likely you will enjoy this very much. I however, need more variety from my pickup, and I need it to be less dark and more bright. If you play anything that is less than rockin' this is not your pickup. I would however, say to take a look at the rest of the BG Pups lineup, as they make a lot of really nice stuff.
Did you find this review helpful?yesno
»