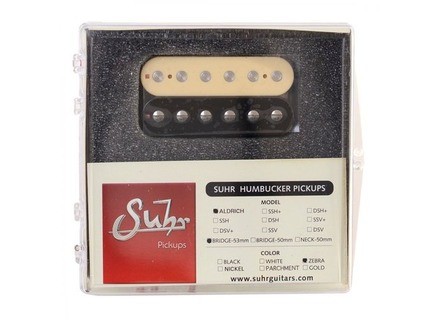 Suhr Doug Aldrich Bridge
5
Suhr guitars are some of the best custom strat style guitars you can buy. They are played by people in all types of genres of music. Anyone who plays a Suhr swears by the quality of the guitars they put out. They can build you just about anything you want and you know it will be of the highest quality. When people build guitars like these from scratch you dont want to just throw in some one elses pickups. Companies like that who build everything themselves want to throw in their own pickups specially voiced for their own guitars so the pickups and guitar match together perfectly and maximize the performance of the whole instrument. Doug Aldrich is a famous guitar player most famous for playing in Whitesnake recently. He has his own Suhr pickup which is very popular in the aftermarket world because it is just a good pickup overall. Aldrich and Suhr hooked up to make the best possible pickup for his style of hard rock playing. It is the hottest pickup that Suhr makes. It has a huge sound but doesnt lose focus in being so big. The pickup is super tight, it has a very modern feel to it. It is almost like an active pickup because of how tight it is. The high end is high but somehow it never gets harsh. It is the best kind of high end because it keeps your sound from becoming muddy but it does not make your ears bleed. The low end is super tight and focused and can handle just about anything any other passive pickup can handle. If you are looking for a great hard rock pickup that can play just about anything and is not from the typical pickup companies this pickups is a great choice. More and more people are looking to Suhr not just for guitars but for their guitar parts like these pickups.

Suhr Doug Aldrich Bridge
5
The Aldrich humbuckers from Suhr is a magnificent set of pickups from one of the premier players in the boutique world of guitar and amplifiers.

Done in collaboration with Whitesnake's lead guitarist Doug Aldrich these pickups are meant to rock. High output Alnico V magnets offer more than 15K of DC resistance. Combining the output of an active humbucker and the virtues, soul and tonal characteristics of passive pups, these babies are the best of both worlds.

I have them fitted in a Gibson Les Paul Custom black beauty both in the bridge and in the neck. I bought the set used and have never looked back. The coil splitting capabilities are superb, they split better than any other pickup I have ever tried or played, just amazing.

They might be a little bit too high output to play most jazz, blues, they are meant to rock, and rock hard at that. You can't get pristine cleans out of these pickups since they tend to push the preamp a little bit to hard on tube amps. They shine at distorted guitar tones, remaining exceptionally tight on the low end and having a high mid emphasis "kerrang" type sound.

Pair them with a Marshall type amp and you are easily coping Doug's legendary guitar tones, no problem. The definition is spectacular and the note separation is there, they never get muddy and you can throw in as much gains as you like, you are still going to know what you are playing. They can even handle downtuned riffs with no problems at all.

Between EMG's and these I probably buy them again for the added versatility that they offer. Don't get me wrong, active pickups are great for heavy metal, but not much more. This pickups offer that and so much more. Highly recommended, especially for LP type guitars!

Suhr Doug Aldrich Bridge
5
Been using this pickup for a few months... but it was love at first listen. I threw this in the bridge position along with an Eric Johnson Custom in the neck of my Gibson Les Paul Classic. This combination absolutely kills. Heard Aldrich' tone in that Dio DVD..the one in New York after 9-11...and thought...&quot;this guys sound is heavy...but SO smooth...how is that possible?&quot; He shred using a Les Paul..but there was zero shrillness..I was intrigued....I have done a lot of things to get a high gain sound , but to control the highs on my guitars...aluminum tailpieces, Greenback type speakers, etc...but this guy had a different dynamic going...

First..I would like to say that this is an incredibly high output humbucker. The other guitarist in my band uses and ESP with the EMG 81/85 combination. Nice guitar. The output of this pickup matches if not exceeds the output of the 81.... which is pretty shocking to me. This pickup, however, has a sweetness and fluidity I have never heard from another high gain humbucker. Balanced and smooth for sure... but you can typically find that from a Duncan JB..this takes it a step wayyyy further in the fact that it is still cutting without any harshness... surgical but not shrill. It is a very precise pickup without over-emphasizing the trebles. It is a &quot;round&quot; high output pickup. Weird. I have tried lots of different pickups over the years.. and constantly try to improve my tone. This pickup has shined with every amp I have used...I would add that since it is high output...and even though I coil tapped the pickup...it still is basically good for high gain applications, and little else. Some may argue that it is not great for &quot;Metal&quot; like thrash, death metal,etc..probably correct. Better for fusion, prog metal... technical, shredder stuff. It is too sweet to do Slayer,etc...I mean..it could definitely do it..but there are better choices out there. A bit too tubby for cleans....but then again...I use it with an EJ Custom...which is super sweet.. and the volume difference is vast. I never use this for cleans.

Currently using this with several pieces... Voodoo Lab Preamp and effects, Marshall Point to Point hot rodded Plexi Clone, Digitech GSP2101, etc... and lotsa pedals. Cannabis Rex and GB12 speakers in my cabs from Eminence. Sounds GREAT with everything. Sounds great on my other guitarists' modern Marshall 1/2 stack. For the price.. this pickup is hard to beat. A slight bit over typical production models you are definitely getting champagne taste on a beer budget. This is a totally pro piece of gear. I will always have one of these in a humbucker equipped guitar from now on....well, until I get reeeeeeallly old.... :P
Did you find this review helpful?yesno
»

mikaka75's review (This content has been automatically translated from French)" It hurts a lot!"

Suhr Doug Aldrich Bridge
5
I recently on my PRS CE22. The concern of this kind of guitar is that even if the sound is very good, they lack a bit of personality. I was looking for a microphone with nia and character in the heavy rock genre.

Well I was not disappointed.

His areas of interest: rock (any kind) / fusion.
Metal, I think there is better but it does not sound ridiculous so far, far away, even though I see it more in the prog in hardcore.

In fact, we have here a microphone that sends puree (very good level of output) but with some restraint, allowing the game to qualify blithely
Very responsive to attack so; sculpt his sound with a pick is a real pleasure.
Harmonic whistling across the palm mute and keep a very good momentum.

Another plus: it pierces into the mix-hand speaker.

Given the gear Doug Aldrich, I would tend to think that micro was supposed to go to Les Paul, to moderate their side "rock wholesale pork task" and breathe a little more modern side.

Where my criticism has its limitations, is that you can not judge a microphone independently of violin guitar.
My PRS her body and full mahogany table. Its handle and button are flamed maple.
-> By the large presence of mahogany and thicker than a strat size, it is a lot closer to the Les Paul as the standard violin Ibanez.

Now, how will react on the Suhr DA basswood or alder?
Will he lose bass, resonance and become loud in the upper mid-range?
No idea!

All I can say is that the seller of guitar in rebellion advised more model Suhr SSH + home (more modern) as DA on these woods.

In my case, it works wonder.
Regarding humbucker I had / tried the Dimarzio (tone zone, custom wound parker fly), the seymour duncan (SHPR-2B SH5), Bare Knuckle (Holydiver: nice but too cold for my taste) and of Suhr (SSH +, SSV).

Prices in micro guitar rebellion -> 100 E. A price more than adequate for the result.

I am more than satisfied with this microphone. In style and taste that are mine (rock, funk, hard, fusion), it will impecc me.
But I fouterai not a 10/10 because perfection does not exist!

Did you find this review helpful?yesno
»
Read the 5 user reviews on the Suhr Doug Aldrich Bridge »