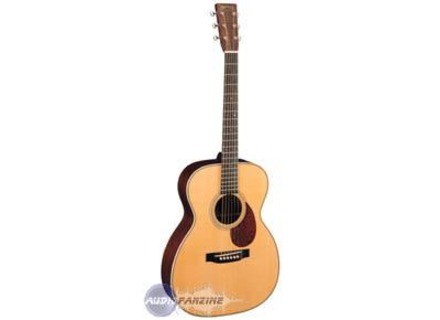 View other reviews for this product:
This is my first Martin guitar and after endlessly playing through so many different OM types, I finally settled on this one. Made in USA, it has very simple features:

for an acoustic guitar, this is plain jane plus a bit of splash. There aren't any exotic woods or any super flashy inlays or modern pickup design.

OM shapes, I've found are extremely comfortable with the way they're contoured for both sitting as well as for your strumming arm hanging over the top. This is a non-cutaway version with decent accessibility to the 14th fret, most acoustic players don't go all the way up to the 20th fret often, maybe for a single note at the end of a lick etc. Thus the need for a cutaway is not necessary.

Out of the box the guitar sounds great! It's foundations are simple and the woods are the normal pair of woods you'd get on 99% of all acoustic guitars that has proven to sound consistently good. There are two problems most players would have with this is probably the 1-3/4" nut width. This is a different string spacing than a guitar with a 1-11/16th nut width (found on most dreadnought guitars). If you're not picky then you'd see no problem, though there are some people who cannot seem to adapt well to the difference.

Another thing is the V neck profile. This is part of the whole 'vintage' package which also includes the belly saddle, the gotoh butterbean tuners, and the aging toner top. The V neck profile was originally how Martin had made most of their guitar necks to be shaped to on a lot of their older guitars throughout the years. As modern technology improved and tastes changed, guitars with C shapes and D shapes were created. I can understand some players won't be able to wrap their hands around this one (the neck) properly for, let's say, bar chords. It does take some getting used to, others may find it TOO thick and lumpy. I myself have been able to take the time to get used to the guitar and play it the way it was designed with not much trouble at all. So I advise that this guitar DEFINITELY has to be played before bought!!! For me, I think it's near perfect!

I might seem like I'm exaggerating here but I'm not. I have played at least 3 OM-28Vs before I chose this one, and I've also played many other brands also!

Soundwise, this is the BIGGEST sounding OM I've heard from any guitar maker out there. I've tried Bourgeois, Collings, Taylors and other Martin OM models and found this one to be the absolute biggest and warmest sounding one. I do a fair share of both fingerpicking and strumming tunes. I wanted a guitar that was able to cover both styles and also be comfortable to play with. I started off playing dreadnoughts just because everybody seems to start that way and have finally discovered that not only are they uncomfortable for me to play, they sound way too boomy when recording and require too much tweaking in a recording environment. Also when it comes to diversifying the styles from strumming to fingerpicking, the OM28V is warm and punchy enough to have every note come out clear, yet big enough for strumming.

I've seen a lot of people play this model guitar at the stores and always have something positive to say about how it sounds. I've yet to meet somebody who dislikes the tone!

I love my OM28V! I was on the search for the ONE acoustic guitar that I would own for a VERY long time. Simple, no fuss, and great sound that would fit the budget I had at the time. I tried many different OM guitars to filter this one out. Bourgeois, Collings, the Martin 000-28EC, the OM-21 special etc. There's something about this specific model that gives it that huge sound. On paper it may seem very similar to others but if you picked it up and played it, you'd know the difference right away!

Martin is a great guitar company! VERY consistent. I played 3 different OM28Vs and they were all consistent in tone and build quality. You'd expect that from such a company especially considering the price!! Yes it's quite expensive! But you get what you pay for! At first I thought I was paying merely for the aesthetics of the vintage package. Then I played it next to many other guitars and instantly heard the difference. A Lifetime Warranty ain't bad either!!

Overall, great guitar, very happy with my purchase! Wouldn't sell it for anything!! I'm only rating it a 9 because I know some players wouldn't like the V neck or 1-3/4" nut. And to be honest, I DID have to take some time getting used to the neck profile. Otherwise it's near perfect!