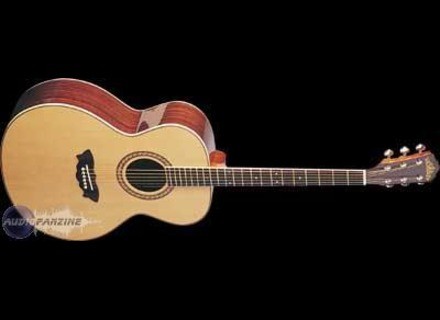 Washburn J12S
4
This is a unique acoustic guitar. It has a rosewood neck and fretboard, a rosewood back and sides, and a cedar soundboard. It has 21 frets, and is acoustic, so it has no pickups or volume controls.

I can't say there's much I don't enjoy about this instrument. It's very much a smooth and full-sounding guitar. It plays beautifully and is very versatile. I think it's a very expensive guitar, but this is because the Lowden company is smaller and devotes more time to detail. I think that there aren't many other acoustics that are very comparable to Lowdens, they are in a league of their own. I would highly recommend at least trying one of these guitars to anyone.

alextazy's review (This content has been automatically translated from French)

Channel rather fine and balanced (like the D10 a little thinner), delicious. ergonomics for me. perfect to play seated.
only downside, the handle originally set wrong, but it is corrected quickly.

Ideally suited to picking. very good projection and separation of notes, not draft. in itches it is also very clean. overall sound from Martin for the beautiful presence of mediums and Taylor for crystalline highs. given the size of the fund, the bass is present but less beautiful than a gibson p ex.

I have 3 years
I love the look and sound by picking (in the spirit of Kelly Joe Phelps with a little less bass)
I like the frets less plastic but it is changing ... and the lack of case, it would have earned standard and really needs.
Unbeatable value for money, I paid € 350 on plugsquare. the model was arrested but there are still some online stores. over time the sound should go to improve and gaining in value.
My first guitar 18 years ago was a Washburn D10 and I loved her like no other but it is flushed, so I went back on one of his sisters and I do not regret at all, they are beautiful gratounes at Washburn. even in China.
I tried the Art and Lutherie, Seagull and the other, this one I had not even tried it but I tried WD sis his 32s, very nice too. the look I packed and I did well, it's a must!
Did you find this review helpful?yesno
»