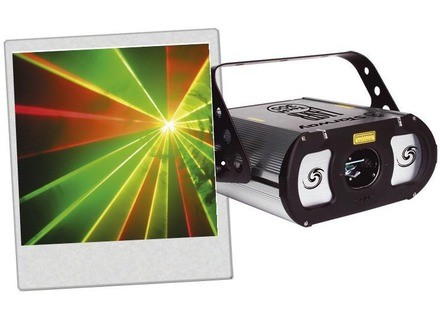 sebouloute's review (This content has been automatically translated from French)

Starway LaserTech 200
4
Purchased in June
Management very easy to DMX, the effects are mainly goods and ruffed with the three colors, drawing enough even for large rooms but we prvoir all of the same lot of a fum.il Air robust and the finish is more than adequate for cons I have not used the tlcomande.
790 trs right price for this machine
I would not change it completely has covient evening to 500 people
Did you find this review helpful?yesno
»

divinitex's review (This content has been automatically translated from French)

Starway LaserTech 200
4
Laser output in March 2006
I bought it was released.

Two red laser 80mW (150 ad and 40mW green (100 Ad Price about 800.
The green has a trs good performance (close to 100mw power yag "mac mah")
Stepper motor - not inside. is a slow (refresh rate of the radius below) but adequate (for me).
The radius of the two diodes are then superposed red, green, yellow (lasertech100 LEDs red and green spar a little.
DMX possibility.
The tlcommande lets you choose the colors (red, green, yellow, red + yellow, alternating every color). We also selected operating modes (music, auto) and the effects volumtriques.

I put 8 for the right price and power is good, the box in aluminum / steel very solid, the tlcommande .....
but they could have galvanized the nitre instead of stepper motor - not to have a more stable beam.
Last day: tlcommande is when she walks ... mine is DGRAD time so I send it for service they have decked some problem with ...
Otherwise it is still great!
Did you find this review helpful?yesno
»

zozoid's review (This content has been automatically translated from French)

You can easily manage the effects via the wireless remote (tiny, one can thicker than CB), and they are a pure beauty compared to other specific forms without laser, there are forms clearly defined, without sacadas in short, a gem!
There are tunnels, ceilings, waves, laser, etc ... more you can change color when you want!

Only problem, the remote works only from the front of the camera ...

Me, Personal, I am filled, I would not change for anything other ...

I put 9 (because of the catch on the remote)
Did you find this review helpful?yesno
»

Pascualito78's review (This content has been automatically translated from French)

Starway LaserTech 200
5
Purchased product on the store's excellent advice mhz!
they do a really delirant price! You have to go see ....
first test outside at night without smoke
excellent result in terms of money
Super brightness green - programs and remote ok
a little slow but it's true qd even a very good surprise when the quality
thank you mega hertz
Did you find this review helpful?yesno
»
Read the 6 user reviews on the Starway LaserTech 200 »

Other Starway lasers less than 500mW