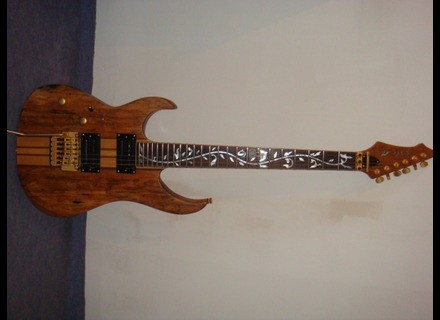 D!d's review (This content has been automatically translated from French)"SURPRISED!! ..... IN WELL!!"

We left only represent 10% of market share and therefore models built for little hands are often those mediocre middle of our favorite manufacturers ranges. Limited capacity, color and so on .... How many times have we dreamed about a particular guitar adorning the window of a shop handed Pigalle, knowing that even by putting double the price we would not have found either because it does NOT exist! (Like a JS Ibanez SV or 7 strings). At this, often us add a little note additional 10% for the extra manufacturing cost, well yes, our engineering at a price.

Clearly, no other choice but to turn to the luthier the corner, our friends kangaroos (Gaskell), or very few high-end models of some manufacturers (ESP GIBSON, FENDER) and provide in all cases Tickets € 1,000 minimum to start research ..... And frankly, not to mention ... GIB SON ... (I have not mentioned?? No I have not done??), Well it makes me ch .... to put as much in a guitar whose frets are not even chamfered at the output of the factory!

Frustrated you say?? Yeah and I claim, I must not be alone .... but now turn to the fairy tale that it becomes interesting .....

Vla ti don &#39;not by a beautiful afternoon of Sunday September 2009 (the third month of the third), I surfate on ze ouaibe looking for some gem all aroun&#39; ze world.

And then I see on Y-locker .... Ahhhhhhh these beautiful pictures are drool, this line of vine on the handle, this call to love she throws me to put my fingers on his body, much like that of a woman who kills you with "go Go fiddles me! ".... finally good, you immediately see what I&#39;m talking while poetry and finesse.

And then I fall NA-MOU-REUX! To the delight of my wife who told me it was time for me to return it .....

So maybe that saw all rotten pictures I posted it does not please you, but I do not care because it was not for you but for moa. And then those who would tend to say that I have shit tastes, I urge them to go again in front of my wife in fact, they will experience blindness.

Good return to our sheep. Guitar auction is because at the time RWG also put his guitar auction. There are parties to such a low price again, this is sad and I understand that I do not track that immediate purchases.

In short, I look at the stuff with my eyes toad death of love and frankly, a guitar with a GAU-CHER THE COL-round, well it runs not on the streets. I&#39;m a vague calculation by comparison, more the € ural is $ 1.40 so everything goes well, I tell myself that I want, I get it and I bid a patient who can not stand the competition . If it ever happens at this price the taxman expect the balance of the IR ......

Only downside, I have not tried ... but good, too good, to hell with varisses, I press the "confirm" button.

And DREAM (U.S.), I won the auction at around € 300 (if I swear I spit!). My dear and loving, concerned our budget, then ask me the question: "And if it does not sound what is not playable???" ...... What pain in the ass to want to break my happiness, "Well it will eventually wall!" Well yeah here is an expensive part but when you love it does not matter.

And then started in my tracks, with $ lowered, I also order the holster bulletproof RWG to be stamped on it is not damaged during transport. What&#39;s on, is that if it does not suit me, I have a guitar on the wall and a closet case more .....

After a well packed week (cardboard, bubulles and news of redneck texas) arrives beautiful as I hurry to unpack. Crazy, it corresponds to the announcement saying (from memory):

We see immediately that this is cut chisel in the mass. It&#39;s not a guitar fi ..! Man what a guitar!

No dislocation of the shoulder in a first time, it is a good sign, but we immediately said that if she should finish the wall, two, this is perhaps not that it will yield first .

And suddenly BOOM ..... playability ... how to say?? Ben for a long time I was satisfied my Ibanez Sabre 470XL now that made me think of a cheese grater for beginners as those found € 50 in all good bouclards, 15W amp included in the pack.

Access to acute is impeccable, the neck is fast accurate and efficient. The touch is good as often walnut, it has generally nothing to envy my LAG ROXANNE (a real French pure sounding, not a Korean 200 bales).

Conclusion: Final Notice, this is the living room wall will be relieved!

Then you have to test these smokin HOT blades whose name is unknown ... uh ... unknown!.

Neck pickup, bridge, split, rock, blues, maiden, metallica, guns, Lynyrd Skynyrd, gary moore, steppenwolf and so on ... everything passes and sounds awesome. Must I still tinkered with some presets for JMP1 ZE sound.

Then some of his clear and there really Cabrel on it NOT SE-NOT! (Naaaaan kidding!!). Say that on clear sound is average blah in the sense we feel that the pickups are direct and powerful and it would say "Zyva, do not bitch sir, send me the distortion."

The sound is chattering and do not even think to play a ballad with chords, it too hard. microphones are typed heavy.

Mumuse with the split to enter simple and follows a loss of remarkable power. It must raise the levels of all its becoming a slurry.

Still, I must say that reducing the gain of the preamp on clear sound, treble and presence I managed to get a soft and muffled sound that my ears better support ..... as if everything is in the equalizer.

8/10 for the typed side microphones clear sound and rotten in single coil guitar that exclude this certain styles of music. on the other hand, it is mounted Floyd, so we must also know what we want and what is expected of her.

I use since 2009 according to the mood between a LAG Roxanne and ESP Horizon 2, which are more versatile.

Yes, I have played on many models, but I bought some.

Value / really excellent price. So pleased that I bought for my eldest in a 300DMX RWG a year later, in right this time. The latter has nothing nothing nothing to envy to a Gibson Les Paul, it sounds terrible and the gameplay is great!. I look forward to even take me when it will color a little less garish on this model.