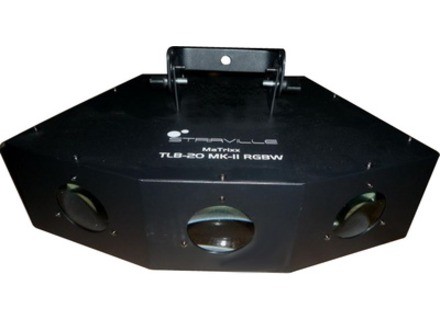 Ombest's review (This content has been automatically translated from French)" Well, gets the job done!"

Stairville MaTrixx TLB-20 MK-II LED RGBW
5
€ 88 purchased in August 2012, used in addition to two GoboPrism lamp outside to water a very large dance floor, he did his job.
It develops round of different colors, the rhythm of music or programs to a wide horizontal band and a relative depth (not it's going anywhere anyway). We must therefore go to the light that illuminates an area up. You may say elementary my dear Watson, and Led forces, it must be coupled with a fogger + fan working to see the light rays (I saw two videos on Youtube of the previous model, and I was a little disappointed with the result, but in fact the video was flooded with light fog highlighting the light beams). The round was thrown to the floor voyent, no problem.
I would have liked against some passages in programs Strobe mode with rounds scattered around here and there instantly, shame ...
Lightweight, and here it's great!
In my opinion, we must connect 2 in master / slave with machine (s) + fan mist.
Only problem, as often:
1) contains polystyrene packaging that breaks and crumbles every time (here can seep into the device). I had to replace the polystyrene by air bubbles to leave it in its carton to protect.
2) power supply cable length ridiculous! Consider buying one longer. A 5m costs only 5 € 40 in a certain supplier in Germany.
I am satisfied with my purchase, but with a smoke machine, and connected with two models, here is hit in the price bid for interior!! Nowadays, it is mandatory to have a fog machine + professional fan to enjoy the play of light that are mainly Led, and here it is a shame because nothing works as well outdoors as efficiency within that GoboPrism an old lamp that moves to the rhythm of music.
Did you find this review helpful?yesno
»

Other categories in Lighting