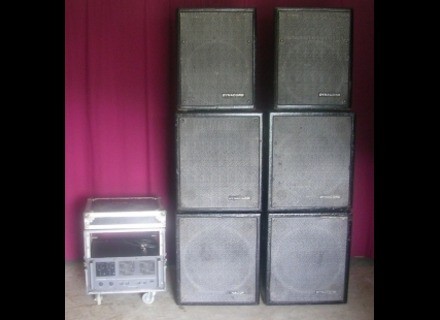 All user reviews for the Dynacord P5

ference's review (This content has been automatically translated from French)

Dynacord P5
5
I used this system Dynacord (EV also for those who know) many times and in different configurations, conductor, mobile disco, provision of all kinds. And the result was each time up to my expectations. Dynamic sound in the bass, accurate mids in acute, but also an exceptional performance from asser congestion can take this system P5. Reliability nothing wrong side, it's tough, especially when the system is driven with amplifiers process origins. In general one branch and it sounds. No need to rave in the settings, the system pardons much. And listed emcombrement / weight is forty holidays, we may also suspend the heads of this system to further optimize its performance, or use them as back on stage, so versatile too.
Returning to the performance (as in this case we talk about performance), the first time I heard this system work I thought it was almost double in power, I quickly realized the efficiency and power had nothing to do from one system to another.
Compared to systems with anceintes amplified newer facing a dead donkey, it is to see. Those unfamiliar with this system may be very surprised by comparison with the pre-amplified current to less than typing in the very high quality amplified, but now the prices are not the same either. When a system is generally working well for long, as they say ... but often mimics
In time this system is a good deal if you can find, listen to before going on another system used similar price. Your choice will be fixed soon.