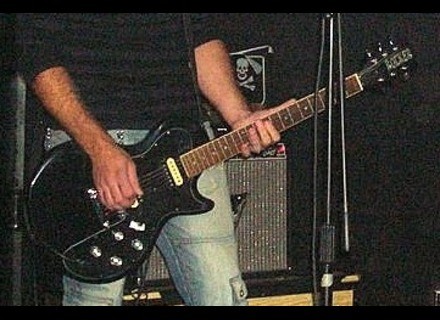 nicobackseat's review (This content has been automatically translated from French)

The handle is extremely pleasant and easy to play. That is its strength.
Access to acute is done easily, even if I play more in rhythm.
In terms of weight, it is light enough, obviously it's not the Gibson.
The sound is OK or good, but I deserve it changes its original pickups for him to put Seymour Duncan or Di Marzio ... and there, in my opinion it should be a vamp ...

It is well suited to my style of music (punk rock, rock'n'roll) approximates well because of its typical Les Paul, namely a big warm sound, but then again I always play with the microphones of origin and they are a little weak people for my taste ...
It's lack of potato ...
I play without effect, in direct contact with a 90 watt Fender Deluxe amp transistor, and the Crunch.

I have this guitar for 4-5 years and I am saving to pay me a real Gibson Les Paul ...
But for the record, I found this by chance in a Cort Depot Sale and I immediately flashed on his look! After a brief negotiation with the seller who knew more and stereo and sofas that guitar, I could go home with for the modest sum of ... 40 euros !!!!!
some adjustments in the luthier later, she was like new ...
In other words, price / quality ratio, it does ...
I searched for against long to find what guitar it was the copy, and I've never seen other than mine, so if you have one, let me know!

later to be totally objective, I think it is well worth a good Epiphone and only if it changed the pickups, you have a guitar more than correct.
His most compelling is its vintage look and handle very nice to play.
Did you find this review helpful?yesno
»