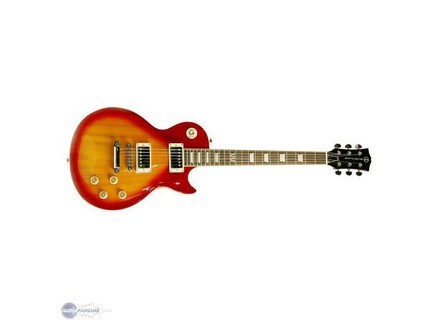 proper finishing and trs look closer to the original short, we are dealing a nice copy.

The handle is enjoyable, the CHAC is as acute on the right heel so lespaul pais no muzzle to the acute, short conventional!

the body is heavy but less than the original due the diffrence of wood, but that's okay.

it sounds quite a vacuum.

I play a little bit of everything from blues through rock and metal.
I play a roland cube and a marshall vintage.

the pickups are not bad for the CATEGORY, a gibson sound but a little less friendly, a lack of precision in a chouilla saturated, but the fact trs well, frankly it sounds terrible that guitar for this price, I play a Epiphone Les Paul sounded less!

in short, a good alternative!

I recently but I was THE FIRST version of this guitar the lp custom, and I can tell you that it is close to that trs it only better!

finishing a progress, the default version of THE FIRST disappeared!

a brief Russianness! THE FIRST I sold and I'd regret having seen it in the store with his amliorations, I broke down again and I can tell you that I not to resell, because it has all the advantages of the first version without the default! short if I had known I would have expected this one!

TRS has good value quality price, more if you had told her to give it even closer to the gibson, mount GFS pickups, believe me thunder was more than one sound !

I intend to do his mods to put a sound APOG!

I would do without this choice hsiter is a bargain! ELYPSE is certainly an entry-level brand, but the efforts of the brand standards are achieved, although plsu some great brand!

the quality goes up over the years a good point!

damiansdick's review (This content has been automatically translated from French)

Little picked up at my Guitar Luthier for a pittance

The guitar has a shape of "Les Paul" Ergonomics Report

Mine is very, very marginal So Mahogany Excluded But nice enough to a "Les Paul"
The rosewood fingerboard is beautifully finished The Inlais are inlaid

It Sounds good to Empty

My luthier has Changed the pickups before I sell it

So, I can not judge of Micros Originals

Versatile enough with this set of pickups

Pickups are short change makes her a good Guerriere for cheap

Finally a Good Guerriere, I must say it does very well Work
The Clear Keep The Coup Guitarist despite my somewhat insensitive and myself who do not too much cleaning

I possess a lot of scratching of Good and Less Good

Pickups of the Really Good for Mine