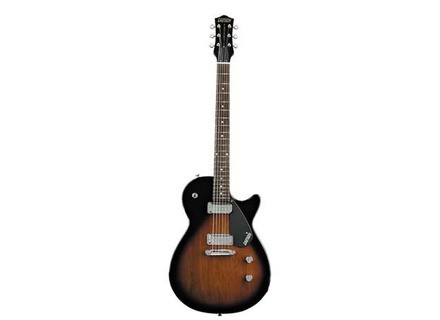 Gretsch G5220 Junior Jet II
4
This is a lower-end Gretsch Electric, almost similar to the Les Paul in a way. It is a Chinese made guitar. There is one volume knob and one tone knob. There are two mini-humbuckers on it, and the pickup selector switch is on the top left (from the guitarist's perspective). There is an interesting bridge where the strings wrap around the bridge, unlike most electrics where the strings go through the guitar.

This guitar, being what it is (a beginner's guitar), isn't going to sound as good as some of the high-end Gretsch guitars, but it's still a really solid sounding instrument. For a little more effort, you can just remove the pickups and replace them with better ones; this will give you a world of difference. At that point, the guitar plays and sounds as good as most guitars that are a few hundred bucks more. It's got a rich, ringing tone that some people have said is similar to George Harrison's (which I agree with). Overall it sounds good as is but gets better with a few modifications.

For such a cheap guitar, this thing is pretty solid. I think that with a little work in can be a really great instrument. I've played quite a lot of guitars in the beginner's price range, and I think that this one is probably one of the best sounding. It definitely is leagues above Squier. I would have to recommend at least trying this guitar to anyone looking to get started.