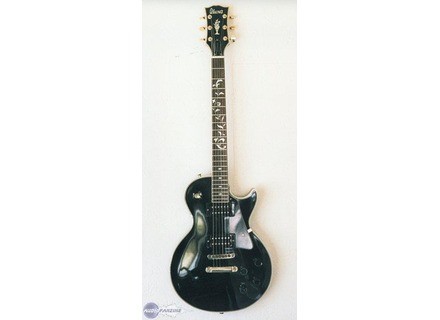 captain's review (This content has been automatically translated from French)" It has all of a Great !!!!"

Very comfortable handles.
Easy Access to treble.
Les Paul was the same as the weight the same.
Sound input is, I have to change the bridge pickup that started it get old (1975 anyway) I hesitate between a modern micro and same style baaaa see.

I use it for too long ????
I had a Gibson Les Paul Standard, which are classic guitars on it but the why pay more ??? How much longer manufactures, of okas you can find and take their eyes closed if you like what his sure.Elles well over 35 years and still sound great.
Given his age and weight I did take longer live because I also took of age and am also a fan of strat right now I'm signing Dave Muray but I keep because I do when even some repeats !!!
This is a guitar that has a soul and I think it will end this life with me.
Did you find this review helpful?yesno
»

I possde this guitar since 1983, it is still prcise and handle of a fine is an incredible ease phnomnale.
Only concern, almost 30 years APRS birth (I have not bought new), the pickups are a little "flushed" knowing that it's a sound trs 70 ds the dpart and not attack the "F1" current.
I left that repeat the coils of the PCHE microphones to locate the original.
But what a violin! And has not move.
Access in acute is perfect for a guitar shall adopt (as opposed to Fender, for example).
The right sound for me is: the micro block in acute and acute volume and microphone halfway serious highs and its always the bottom.

The sound "fat" 70's. You have to love, like Slash, but if you like, it is served.
The best is the JCM800, like so many other guitars.
I like the sound of double-greasy coils.

Thirty years in my hands but not the only one in my collection so ...
Its handle is exceptional.
Double-coil, Gibson I tried but could not, the era, and offer me that Ibanez is still with me although sometimes a Gibson, as what ...
A report qualitprix unusual.
If I ever despite Fender, Gibson and others, it's not for nothing.

stalingradbastien's review (This content has been automatically translated from French)

As said the handle is very comfortable but for the crazy tapping is not too ca.
access to the acute carrement is easier than copying the model.
it is rather heavy but the comfort of the game is not standing appointment with a les paul type except for beefy ....
the sound is on and we are not disappointed.

J I'm changing the pickups of origins that is aging badly
while 59 seymour jb config is based all on a background marshall (rock n roll)
well round neck / bridge incisive tone controls and volume are not for anything we get some very good changes in sound, but it remains very distinctive 70/80 Let's please.

It's been a momment I troll, it really has a soul that scratched
I have tried quite a les paul, custom standard etc. ...
is not a model has 30 000 dols but I understand that what the japanese collectors hard.
choose to do again without hesitation.