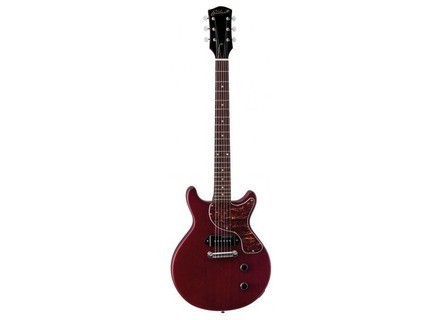 jimilu's review (This content has been automatically translated from French)" Vintage, beautiful and good"

Launhardt Guitars TLJRrd
5
Here is my opinion on a rare model as it is a guitar based on a Tom Launhardt model Les Paul Junior, the characteristics are identical to the original model of 1959, mahogany body, set neck, a microphone developed by P90 EAR, volume control, tone, wraparound bridge, vintage mechanical, simpler than that you die !!!!!!!
Beautiful dark red color, I would say the same red blood! Plate tortoise, the guitar has the look. Irreproachable in every detail. The only thing I was put off initially is the handle, well rounded and fairly thick it filled well in hand, I say "a log", ultimately it is pleasant to use, all positions go well, chord playing, solo, thumb on top. Attention may perhaps be suitable for everyone, it's a race for men lol. Despite

mahogany, the guitar is pretty light, good balance, access to acute nickel until the last case.La shape is classic for a Les Paul Junior model that preceded the SG. Guitar

simple so do not look for versatility with this type of instrument is carved in rock, blues and basta, nothing more!
The micro-type P90 in EIA sounds vintage, rough with just enough aggression, incisive, but still warm, thank you for mahogany. It's hard to describe the sound of a guitar made from which it is connected transporte.Je you play in a group-oriented blues-rock, the first rehearsal when I played with this guitar, others felt that zicos I had a great sound, even before it was good too, but this was good too but better, as previously difficult to transcribe his emotions into words, I'm not Baudelaire or Lamartine, just a poor lonesome guitarist!

The only problem with this guitar is that it's not a Gibson, and is manufactured in Korea, otherwise we would have called him a genius! Some swear by the logo on the top of a skyscraper, I passed this milestone in a long time. It sounds, makes me vibrate, that's all and that suits me just fine.
If you ever have a Tom Launhardt hands you will understand what I mean. Brand confidential for now but great brand, which certainly does not innovate, but has resume high quality standards that have made big guitars.