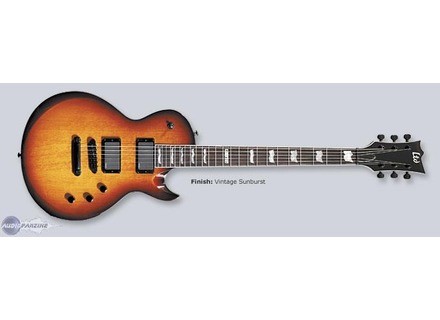 EC-400, LP-Shaped Guitar from LTD in the Standard EC series.

This guitar resides in the family of Les Paul clones, so while access is not as free flowing as some other sleeker type shredders, the access to the top frets is better than a Gibson due to the increase a slick cutout. Super easy to get a nice sound; the stock EMGs are the high quality 81 active set, as opposed to the lower quality versions offered on other axes at this price point.

I used this guitar with Marshall, Mesa Boogie, Orange, and Peavey amps. My favorite tones were hi gain sounds tuned to drop C#, but I used standard E tunings on cleaner settings with excellent results. the intonation is infinitely better than a Gibson LP, meaning this guitar was my go to axe for many live shows, especially on tunes where I played big 6 string chords. The LP I had was so out of intonation it was virtually unplayable for clean sounds; this ESP flourished. I could shred 25-50% better on this axe too; the guitar really had many of the great characteristics of a Gibson LP but had a few improvements in areas that LPs are notorious for (intonation, tuning, shredability).
This guitar could easily cover a wide range of genres, but I personally played a lot of modern hard rock and the guitar delivered in spades.

There are many things to love about this guitar: clarity, consistency, stability, ease of shred, diverse tones...in comparison to my Gibson Gothic LP, the Gibson sound was a bit thicker and meatier, but the difference was not huge. The positives of the ESP were discussed and are overwhelmingly impressive. This comparison is direct, couple in the fact that this guitar was 1/3 of the price and the choice is a no brainer. I should also note that I tried about 10 Gibson Gothics before I found one that I liked; every ESP ec400 I played would have been a good choice, meaning that the quality of control was much better for ESP. Sadly, I flipped this axe when I was in a money crunch, but I would buy another one in a heartbeat of I had the chance.
Did you find this review helpful?yesno
»

LTD EC-400
4
ESP is a guitar company is based out of Japan which now has a sub guitar line named LTD. These guitars are little bit cheaper versions of the ESP instruments so you're going to find a difference in the weight balance and feel as well as the price. However many of these guitars feel basically the exact same as any other ESP guitar and a lot of Gibson Les Paul's I've played.

The tone that you would get from this instrument is basically going to be exactly what you would find it any other Gibson Les Paul instrument. It's got some very good and medium to high gain amplifier setting but won't find its natural niche in a clean tone setting. So if you're playing anything from pop metal and you can feel very comfortable with his guitar. If you're running in front of a clean amplifier they will give you a decent clean especially with the hackneys pick ups but it certainly won't be that polished sparkly tone for you find out of a Fender guitar.


These guitars are pretty well-built guitars in the sound extremely well to boot. This particular model has been discontinued for a while but LTD does make some decent sounding guitars that are the newer models.
Did you find this review helpful?yesno
»

LTD EC-400
4
The EC400 is more my style guitar than the EC1000 is but the quality is not as consistent on this lower end model. LTD is ESP guitars budget line. ESP branded guitars are made in Japan while LTD branded guitars are made in factories around the world. They have many of the same features and shapes just the quality is not as good overall compared to the made in Japan ESP guitars. The EC400 is a simpler design overall. The abalone binding is all gone. The neck has just simple creme binding and the body is not bound. It has a mahogany body and neck with EMG pickups. It has EMG pickups just like the higher priced models. The 81 in the bridge and 60 in the neck is the same as what the EC1000 has. It has a tune-o-matic bridge and grover tuners. It has the compensated nut that helps with intonation. Each pickup has a volume knob and there is a master tone knob with a 3 way toggle pickup selector.

This guitar has less features that I dont like than the EC1000 has. There is not ugly abalone binding. The guitar feels pretty much the same for the most part but the frets are not finished as well. This guitar is in more need of a set up than the 1000 is. It has jumbo frets like the EC1000 but the finishing on them is not as good. It does not have the tonepros locking bridge so your bridge may fall off when you are changing strings. It has the compensated nut so the intonation is better all the way up the neck than most guitars. Most people wont notice this but if you play many chords all the way up the neck you will notice that they sound better. With a setup this guitar can play better than the 1000.

With the more lax quality on these guitars it is important that you play one first. The way guitar factories work is that the better pieces of woods get picked first for the higher end guitars and the rest go towards the lower end guitar. So with this middle of the range guitar you are more likely to get a bad piece of wood than a good one. The EMG pickups can help with this as they are known to make any guitar sound good. The EMG provide a great sound for metal and great bite. The 81 in the bridge provides great high end sound for metal and this provides great clarity. The pickup gives you a clear sound with even the most gain or the lowest tunings. The 60 in the neck is pretty much built for clean tones. The lead neck tone isnt that great. If you are going to play high gain leads on the neck pickup I would recommend the 85.

The EC400 is a more stripped down version of the EC1000. The guitar has less frills but has the same basic features as the EC1000. It has the EMG pickups and the special nut. Both of these are very important to the sound. There are not many 400 dollar guitars that come with real active EMG pickups. This set up pickups costs about 150 dollars. To get these features the rest of the guitar has to be simplified and cut back. A good EC400 will sound just as good as a EC1000 but you are more likely to get a bad EC400 than you are with an EC1000.
Did you find this review helpful?yesno
»

LTD EC-400
3
The ESP LTD EC400 is roughly the midline models of the LTD series that ESP offers. It's for people who are on a budget but want something that's a step up from the 50 or 100 series that they offer. The EC400 features a mahogany body, a three piece mahogany set neck with a rosewood fretboard, 24.75'' scale, 24 extra jumbo frets with flag inlays and the name on the 12th fret, a TOM bridge, EMG pickups and a special Earvana compensated nut.

These guitars can tend to be hit or miss. There are some real nice ones, but there are also some dogs. On paper, the guitar has good specs. The wood is the same as the higher line models, and it has the same features, including real EMGs. However, you really need to play these before you buy. The fretwork can be extremely hit or miss with sharp fret ends and unproperly leveled frets. The earvana compensated nut helps allow for more proper intonation, which is a huge plus, but the bodies themselves can be somewhat dead if you happen to pick up one made with dull woods.

The sound really depends a lot on whether or not you lucked out with the wood choice. If you got a good sounding, resonant guitar, you'll get a great sound. The 81 in the bridge is extremely cutting and aggressive. It works awesome for a great metal tone, and it records even better. You can do brutally tight riffs with ease thanks to this pickup. The EMG 60 in the neck delivers an almost single coil tone at times, and it works awesome for clean tones. I'm not a huge fan of it under gain, but some people like it.

If you can afford one of these, you can afford a used EC1000. I highly recommend looking for one of those instead of the EC400 as it'll be more consistent tone wise and fit + finish wise. While the specs might appear to be similar on paper, the woods themselves tend to be much more inconsistent than the higher LTD line, and that's the biggest reason why I tend to recommend buying a higher model that's used instead of a lower model that's new.
Did you find this review helpful?yesno
»
Read the 16 user reviews on the LTD EC-400 »