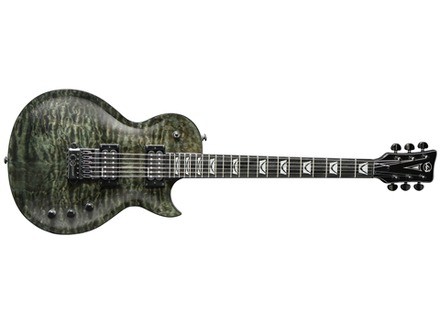 noursifle's review (This content has been automatically translated from French)" Poorly manufactured and means microphones."

VGS Eruption Select w/Evertune
1
Made in Indonesia so a little expensive for what it is. (As the commander I thought the Vgs were made in europe ...)
Photo I thought at a table in birdseye maple, in fact it is simply a piece of paper slipped under the varnish that purports to Maple ... This is cheap!
The body of the les paul is basswood result the sound is very flat, I understand why Gibson are mahogany: it is much warmer.
Short finishing wants to take full view but it's fake!
I mostly bought for the system EverTune: what bullshit! It should be an engineer to understand how it works.

The handle is a bit big but it's it's a les paul ... which will not harm the frets are polished and projecting that hurt the fingers and slow the game 100 euros in the luthier ... Thank you Vgs.
Sound: no cold!

The sound is clean that's ok, but there is no terrain, no depth, I nevertheless raises real Emg 81 instead of emg hz ... But good that comes from linden wood is without personality. In addition, the system seems EverTune block string: there is no sustain ... I'm going to be a normal bridge I think it will get better ...

I do not like to complain but this guitar is a pure scam for 520 euros you can afford a gibson secondhand and that's what I should have done. I bought it for EverTune system but this stuff is impossible to adjust and to prevent bends. Do not like me, avoid this guitar!