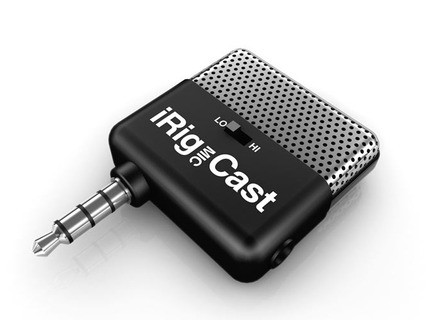 iRig Mic Cast, Microphone for tablet/iDevice from IK Multimedia in the iRig series.

All user reviews for the IK Multimedia iRig Mic Cast

IK Multimedia iRig Mic Cast
5
I was actually awarded this iRig Mic Cast after winning a remix competition locally. It is a portable electrets condenser microphone for iphones, ipads, and ipods. It connects right to the standard mini jack input on the devices and works with iRig recorder App (comes with this app).

Installation: one branch. That's it.
The shape of the plug makes it compatible with the presence of a shell or bumper.

I use it mainly with a looper app, but RecForge Lite and J4T (4 tracks delay compensation for Android).

Qu'enregistrez you with?
- For the moment, especially voices

- What about the sound quality?
That is correct. No bouleversifiant. At the same time, the quality of the input smartphone to play.

- The micro manage to record loud sound levels without saturating?
Not tested yet

How long have you use it?
- Hours

What is the particular feature you like best and least?
- The headphone jack that allows monitoring

Have you tried many other models before buying it?
- On smartphone, except the headset mics, no.

How would you rate the quality / price?
- Average no more.

With experience, you do again this choice?
- Not on. But the experience is still fresh.

I wanted something that would allow me to work a bit with the beat boxing app Looper. Also you can record video interviews.
For the first point, it rolls. This is significantly better than the headset microphone.
The second will require further testing. IRig Mic Cast But being placed on the smartphone, it will forget noisy environments. At the same time, other solutions are clearly more cumbersome. Compromise, then.

One note: it comes with support for smartphones. Personally, I do not care. I would have much preferred (but really a lot) IK book a small plastic case for carrying the microphone from shocks and dust in a pocket or bag. Shame.

Well, this review is fresh, so to be taken lightly. I'll update.
Did you find this review helpful?yesno
Cookies help us improve performance, enhance user experience and deliver our services. By using our services, you agree to our use of cookies. Find out more.