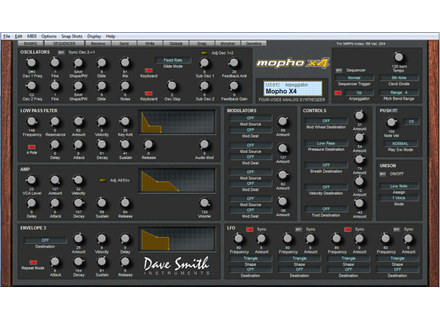 This product is an accessory of: Dave Smith Instruments Mopho x4.

Soundtower [Freeware] Mopho X4 LE SoundEditor
3
Easy installation. The manual is ok, although there is not much to read because it's all clear once you get the X4 Mopho

Q6600 runs on a PC assembled specifically for audio. RAS (yet happy).

There seems to be a display bug in the sequencer window. It sometimes appears slightly anything and just play one note and move a bit to find the correct display of its sequence.

I use it for one year. It's free, so no worries for the price.

After ... is it really useful? Frankly, given the ease of programming MophoX4 and direct accessibility, it is less interesting to work its sounds on screen than on the synth.
In fact, as in my studio, the synth is not always right at hand, it serves me especially remote for not having to get up every little parameter change.

Where it takes precedence, it is about programming the sequencer: having 4 lines displayed one below the other and can not adjust each mouse is a little more compared to the Editing on the synth itself. But hey, it's not bouleversifiant.

I regret that the screen layout does not respect more the spirit of the control panel of the synth.

The "pro" version seems her make really interesting. Among them:
- Separate sequences for use in backup any sound
- Morph between two sounds
- Management and backup sound banks
- Convenient ways to program the sequencer

The editor also offers a "Plug Mopho SE", an editor VST easy integration and control in a sequencer.

on the other hand, to $ 40 after ($ 60 for two), I'm really not convinced. It was a lot of good synths or virtual effects at this price. It is anything but simple tricks of control.
Especially since the free version shows imperfections.

To conclude on this: it's free, so feel free to download. This is useful, but it does not add much either.