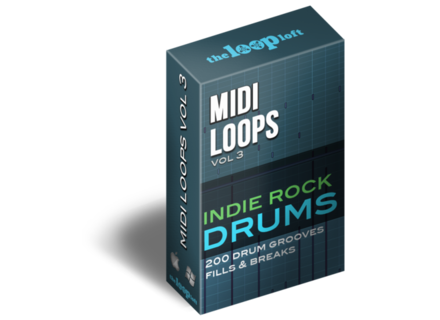 The Loop Loft Indie Rock Drums MIDI Drum Loops
4
Used with EZDrummer 2 and SSD4. The bank is somehow organised (you'll likely have to reorganise it to taste for a more convenient use, as is often the case with such products), inspiring and diversified... BUT, there is a major flaw, as these MIDI loops do not... loop correctly(!): each loop originally is followed by a large number of blank measures, which forces to tweak for using properly in a DAW and makes the whole hardly usable in any virtual drummer's preview mode.

After contacting The Loop Loft twice, I first was told they would investigate the problem, then got no reply at all the second time. I ended up correcting this problem myself using Markus Schwenk's MIDI Editor to edit the loops one by one, and now they are plainly usable (and definitely would deserve a full 5 stars as to their quality, IF originally provided in such a state).

This collection really deserves its title, every indie rock fans should find something to their taste here (I actually couldn't find much that I didn't like). It remains usable -and sometimes even sounds better to my taste- when used way beyond the suggested BPM for each collection, and is definitely useful either for inspiration, jamming or direct use in songs: love it, especially the DC and Seattle "sessions"!

I shall also mention that I also own several other MIDI loop packs by The Loop Loft and encountered no comparable issue with any other of them. The fact they did not contact me back the second time also is unusual, I always got replies whenever I had other issues.
Still, I feel somewhat frustrated that the two reviews I tried to post (months away from each other) on their site mentioning the problem never got validated (with no explanation whatsoever, while in the meantime other user reviews were published for the very same product)... Perhaps in their minds a 4-stars-review is not up to par for publication (definitely NOT something you'll see at AudioFanzine btw

)? It won't help making user comments on their website trustworthy, and I definitely shall skip this section in the future.

The original price tag (29$) is also a bit high for a total +/- 200 loops (especially compared with products in more or less the same price range by Groove Monkee or Platinum Samples that offer way larger numbers of loops equivalent in quality), but at The Loop Loft they often offer special sales and it's not unusual to be able to grab one or the other of their 29$ MIDI packs for 10 to 20 bucks.

So, 4 stars "as is" with this MIDI loops size problem, but would deserve 5 qualitywise should this issue be corrected. AND, maybe, should not-even-negative-but-not-positive-enough reviews also be allowed for publication on their website?...

Other categories in Resources/audio samples