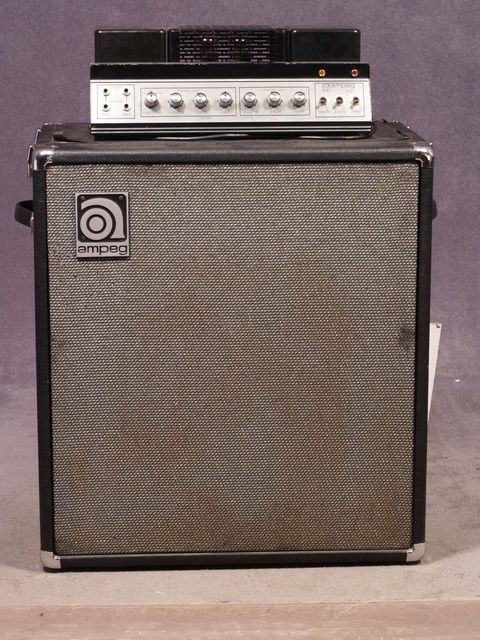 Other Bass Amplifier from Ampeg .

I found that there is little or no opinion on the series of Ampeg B 15, although they are a legend in the world of bass amplification.

I found that there is little or no opinion on the series of Ampeg B 15, although they are a legend in the world of bass amplification.

Power 60 Watts
The connection is obviously from another era, in front facade:
4 imputs instrument: Channel 1 normal / bright, channel 2 normal / bright
1 rotary switch with 3 modes: bass, flat, guitar
Channel 1: volume, treble, bass
Channel 2: volume, treble, bass
Standby switch on / off
Power switch
back cover:
Output HP: So it&#39;s a combo jack HP is not detachable from the head, there was a line out which can be used to connect to a mixer, a 2nd HP port and a Impedance Selector: 2,4 or 8 ohms.

I put 8, mainly for the selection of impedance module authorizes connecting on just about any box. Although the connection is complete and practical, it is of a different generation and therefore not comparable with current amplifiers.

The config could not be easier, the impedance is selected based on the box, and then branch is lit!

Plugged into a box SWR Son of Bertha (1x15 ") the first sound I heard was HUGE!, Powerful, warm and ... very much! (60 Watts, my c. .." I think the power is also a function of the lamps used) never heard that before with other amps, I play on an SVT 3 pro on the same box and it did nothing comparable.Je also has an RV and a classic SVT SVT 2 Pro only I plug currently on a 6X10 HLF, they sound great but different.
I do not have a manual but it&#39;s really not necessary: ​​it is an amp plug & play ".

I play in a group of power-pop-rock, and although I do not even ale tried again, I know it&#39;s appropriate.

I plugged in some low precision, and JazzBass musicman: the sound is always nickel colored (Ampeg, whatever) to low active attention, however, it can saturate very quickly if we do not take care to adjust the volume of the bass . However, a Precision or Jazz (or other traditional passive bass) are what suit him best.

Something very important: the mode selector allows 3 "types" of sounds: bass, which sounds like vintage and probably previous B15 (B15N), ideal for his "Motown" sound very round and warm.
Flat: a more aggressive, more slamming very warm but more like an SVT. It&#39;s my personal favorite and I believe to be the most workable.

Guitar: Me, no interest, but I still plugged into a 2x12 "marshall: the clean sound is ok, but to get saturation, must push the volume up (from 3 / 4). Sound would be interesting for a noisy group / garage, but I was not convinced it&#39;s a great bass amp, but bof bof for guitar.

Depending on the mode chosen, one can assay the trebles and basses to get what we want.

I put 9 but without any objectivity: this is the kind of sound I was looking for: beautiful, powerful, simple and direct.Cet amp is not particularly versatile as colorful and distinctive (that said, most hits U.S. the 60s were recorded on this type of amp). It&#39;s just that it&#39;s an old amp, which had its heyday in the past but still compatible with today&#39;s music is a classic, what.

Small point, the box used to be interested in the height, my SWR, very modern, for example, does not really suit the tweeter sound and breath dirty too. I think ordering a replica of the box original.Je will soon try it plugged into my 6X10.

I use it only for a month at home, I do not know maybe not quite this amp, but anyway I am very satisfied.

Its weight makes it difficult to transbahuter, the lamps are fragile (like all tube amps ...) but once I have the box that corresponds to it, transportation will not be too painful (flip-top). I still do a thorough review and change the lights. And mode "guitar" is useless.

I&#39;ve tried any other model because I wanted this model, and comparison with other current combos is impossible.

The value for money is not terrible, I bought it at 600 €, but without the box and I still do réviser.Disons that when you love it does not count. One can find in the U.S. or the prices are still correct, but it&#39;s a bit of a collector&#39;s item, there is no real value for money to establish.

It&#39;s a choice I will not go (I have one and it&#39;s enough for me or then B15N), but I urge those who are looking for an amp character, fans of Ampeg because the sound is just wonderful and my sense, superior to many current Ampeg.

I put 9 because that is what I wanted, and I know any bassist who Tatera of this old beast will not be indifferent. it is a MYTH!
See less
60
»