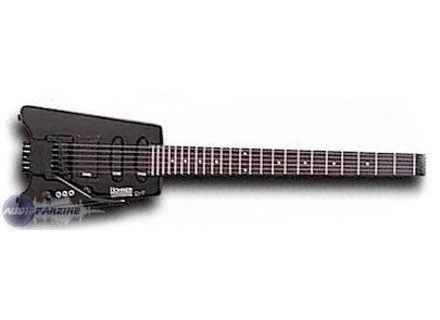 G3T, Other Electric Guitar from Hohner.

View other reviews for this product:
Hello, my Hohner G3T was purchased in U.S. import, which is no small feat since I came with more than a month behind the originally announced. I understand that it was manufactured in Southeast Asia but I have nothing against that ... For once, I have not had any bad surprises.
Superstrate configuration is typed with double bridge and two single side stick and I'll tell you ... brown brown I love it! I have no complaints about the quality of the microphones, with distortion side easel, I did not need aditional ... When the simple discovery for me, with an overdrive upstream of a beautiful clear tone, I put the microphone in addition to the central neck pickup and there, it's dope, I'm getting high speed plans in clear way Sisters of Mercy. End of story it sounds
The vibrato is effective downhill, but his race permetra do not raise the pitch in semitone beyond the ... In fact you have an equivalent of a Bigsby on hand. But it is already. The blocking system is performing. Nothing to say.
The settings are a bit special with a switch for each of the microphones ... on-off for 2 singles, 3 positions for the double (off, single, double), one volume and one tone. I like a flat, the volume position directly under my little finger and I tend to handle inadvertently ... This says nothing dramatic ...

The neck is very slick, I'm infoutu carractéristiques to check but it must be of a tuning fork with a 5.25 slim narrow profile (side button). Good academic atmosphere above. I am a follower of fundamentalist 24'3 / 4 (I played on gibson more than any other shovel), but I'm not frustrated by it. in fact, I do not know.
Strange feeling to have so little matter in the hands. In contrast, ca sends resonance issue, like any serious shovel ... Just a matter of habit so ...
Access to the highs, I do not talk about it, this is a highway ...
Talking about sounds. I have read many comments on the subject somewhat flattering name ... And I do not agree. I play mostly metal guitars on passive microwave and I did not complain of side pattate the humbucker bridge. It fit. In terms of simple, being very balanced output level, their use simultanné just makes a wonderful result ... telecasteresque ....

This guitar is versatile but very modern. I used that I want her beautiful clear crystalins or neck pickup sound clear, I mean without too much fat. I'm mostly home studiste and this guitar is very useful because very "civilized", it sounds a bit dry, certe, but it sounds clean ... And small note in passing, the roar is in the fingers of brown shit!
I used it with Line 6 hardware and I have no relevant opinion on the amps here.
On this guitar, I like the sound side edge of the bridge humbucker, very accurate and the avalanche of superharmonic of two single employees at the same time ... I'm very basic.
In short, this is a good instrument.

I have this guitar for 1 year before, I was walking with my Les Paul and my amp. Since then I upgraded, I have this shovel and a microwave bean Line 6 (well I cheat because I'm in LINE 6 for over 10 years) and an overdrive because I'ma fetishist. I am mobile, lightweight, and I have some gear that sounds in any conditions.
This is my first travel guitar. I have a Les Paul Studio 10-46, a Fernandes Vertigo rise at 12-54 (plan fat pig), a guitar WANDRE (replica EASTWOOD) in 10-46. It is mounted in 10-46 and with a personal investment moderate adjustment issue, I have a fully functional instrument which I have no complaints.
I personnaly responsible for the maintenance of my instruments and I admit having said that elements of this guitar require a little investment. Do not trust a maintenancier lazy, the hardware is a bit unusual.
Mrs I was mailed from our beautiful country and today it is in Afghanistan. She was still perfectly tuned to his arrival. It's a damn good guitar. I would separate myself for anything. If you are looking for a good travel guitar, do not hesitate, it could make you more services!
See the source
Did you find this review helpful?yesno
Cookies help us improve performance, enhance user experience and deliver our services. By using our services, you agree to our use of cookies. Find out more.