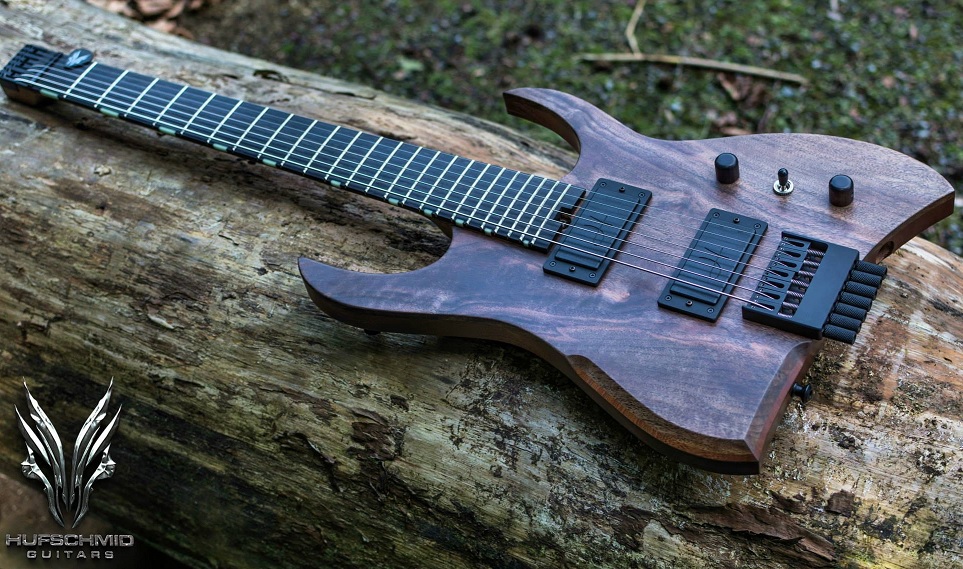 Other Electric Guitar from Hufschmid Guitars .

Hufschmid Guitars H-7 HeadlessPublié le 10/17/14 à 06:17
I'm a 25 year old musician and bedroom music producer from Sweden. Music and playing guitar has been my passion for as long as I can remember and throughout the years I have been playing on a large variety of brand guitars. From my first electric guitar, a cheap Samick Stratocaster to Gibson, Ibanez, Fender, Schechter, Washburn and Jackson to name a few. But I've always felt that these guitars have been missing something in one aspect or another.

Having had longstanding problems with neck and back pain I need a guitar that is light while still retaining all the tone and sustain as well as being versatile enough to handle a large variety of different music genres, from mellow jazz notes......
Read more
I'm a 25 year old musician and bedroom music producer from Sweden. Music and playing guitar has been my passion for as long as I can remember and throughout the years I have been playing on a large variety of brand guitars. From my first electric guitar, a cheap Samick Stratocaster to Gibson, Ibanez, Fender, Schechter, Washburn and Jackson to name a few. But I've always felt that these guitars have been missing something in one aspect or another.

Having had longstanding problems with neck and back pain I need a guitar that is light while still retaining all the tone and sustain as well as being versatile enough to handle a large variety of different music genres, from mellow jazz notes to pop music and on to high-gain riffs on demand.

I first discovered Patrick and his work in, i belive it was 2010 and I was immediately impressed. Not only by the beautiful and high quality woods he is working with, or the fact that i've always been a fan of mahogany guitars and that i find the overall visual design of Patrick's guitars very appealing, but with the amazing tonal properties and clear character the sound of his guitars seem to possess.
I was however hesitant to contact Patrick at first. Not only because as a college music student a Hufschmid guitar was quite far above my budget, but aslo because i know that youtube clips and soundcloud snippets are not always the best way to determine what a guitar actually sounds like.
Then there is also the trap of GAS, the Gear Acquisition Syndrome that i've always been mindful not to fall into.

But I did finally make up my mind and I contacted Patrick in June 2014, and man I am glad i did.

"I have been suffering from back problems almost my entire life and as such I'd begun to explore different design possibilities in order to build a guitar that was as light as possible while still retaining all the tone, practicality and character of my flagship range of guitars, and with this design I believe I have achieved it." - Patrick Hufschmid on the H7 Headless

As it happens this is exactly what I've been looking for. Even though i didn't really like the the headless guitar designs at first, I have to admit that they've kinda grown on me over the years, and Patricks take on them tipped the scales in favour of a Headless guitar. And as I've now found out during our e-mail correspondence, Patrick and I seem to suffer from very similar backproblems.

This H-7 Headless traveled over the mountains in Swizerland and through a rather large forest fire to get to my doorstep here in Sweden, and the guitar was apart from a such a minimal adjustment in tuning that it's not even funny, and probably not even worth to mention here, in perfect playing condition. This guitar is built rock solid, and if you take care of it properly it's most likely going to take a smaller nuclear apocalypse to make the wood move.
Also the HufGlow fret marker side-inlays have an amazing glow in the dark. Just saying.

The first thing you are going to notice when you hold a Hufschmid headless guitar in your hands for the first time, apart from it's stunning beauty and masterful craftsmanship, is the weight. It weighs almost nothing.
I've been standing with the guitar around my neck during several hour long rehersals and if i wasn't playing on it, I'd probably forget it was hanging there.
Having a guitar hanging around my neck for an hour, let alone two hours is not something I've been able to do before without having to suffer a lumbago or two afterwards.

I generally play via a Line6 POD HD Pro (no amp selected, only for effects/compression and what not.) through a ENGL Powerball amp head with matching ENGL 4x12 vintage cab. When i travel, or find myself in a locaion where dragging along all my gear is inconvenient or unnecessary, I generally just line the POD HD Pro directly into Cubase on my PC or into a PA system.

The pickups are hand wound by Kent Armstrong and they are amazing! Whatever style of music I want to play, these pickups bring their A-game.
I can play a high-gain riff and when I turn the volume down the sound becomes more mellow without losng any sound quality at all. I can not praise these pickups enough!

And then there is sustain. The sustain man! It's incredible!
I've heard some people say that headless guitars have less sustain because, well.. the head part of the guitar is missing, including a cut out in the body to fit the Hipshot bridge and lower the weight down a bit further. These people have never played on a Hufschmid Headless, let me tell you. The sustain is second to none and I dare say it's better than many if not the majority of the big brand guitars on the market today.

Once you have agreed to work with Patrick, sent the down payment and an outlining of your hand for him to form the neck after, the process begins. There is a constant stream of communication and I recieved daily updates with pictures, videos and information about the progress of the guitar. I went along completely with Patrick's recommendations, and if I ever had ideas of my own Patrick already had the same Idea. It's apparently not only the back problems we have in common, haha.
Patrick is very easy to communicate with, and very professional when it comes to answering any questions you might have about the building process in a timely manner. There was not a single moment when I didn't know what was going on, and there is indeed something very special about being able to follow the process of transforming a beautiful piece of wood into a playable work of art.

The neck is fitted perfectly to my hand, and the guitar stays in tune even though I'm alternating between a couple of completely different tunings with regular intervals.
I tune it, and it stays tuned. Period. This is due to the amazing bridge and nut from hipshot which, as Patrick explained to me, is only there to seperate the strings and not slide them into a headstock. This eliminates string friction and in conjunction with the solid Sapeli Mahogany wood in the neck and body, and the way Patrick selects the timber and puts it together into a rock solid instrument means that the wood will not move.

So after almost two months of playing this beautiful work of art pretty much daily, there's not really any other way to say it. This is the most amazing guitar I have ever had the opportunity and privilege to play on. Both in terms of the comfort while playing the instrument, the quality of woods and hardware used in the building process and the amazing sounds it produces.
Patrick is a masterful luthier and artisan and it is obvious that he puts a lot of love and passion into building these guitars. You'll see it in his work and you'll feel it when you play his instruments. Buying a Hufschmid Guitar is not just about buying a guitar, It's a personal experience and a journey.
See less
10
»