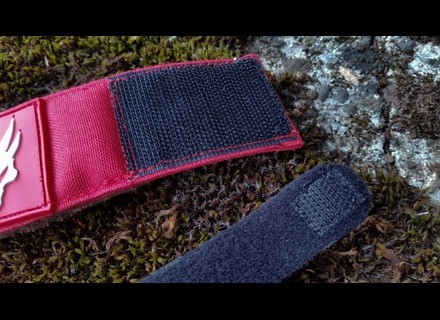 Hufschmid Guitars String Muters
5
I started using scrunchies when I first attempted to mute the strings of my guitars to get rid of some unwanted noises during the recording sessions.

I eventually bumped into what appears to be a pretty popular company offering some muters they call fretwrap but ended up having to replace them every couple weeks, they just start to fall apart. My further searches brought me to the MAB and Batten string muters but both devices have to be mounted mechanically onto the instrument which is not practical.

I then heard through social medial about an artisan who builds guitars and picks, he is based in switzerland, I visited his website and found out about his own string muter design which are completely handmade, I must admit this was the trigger because I am all for supporting something which is handmade and the design was pretty much everything I was looking for so I ordered 2 dampeners which I've included in the pictures (pictures from Hufschmid Guitars BTW).

and the two gorgeous string dampeners. I could not believe the quality of the craftsmanship, this is the first thing you will notice when you handle them, you will spend 10mn at just watching all the details!

I've been using them since April on several guitars, one of my friends is now using one on his 5 string bass guitar, those are built incredibly well and do not come apart unlike the other cheap ones I've ordered, if you are looking for quality, then wait no longer!

Hufschmid Guitars String Muters
5
Hi everyone, today i'm going to compare two string muters, one is from Hufschmid guitars and the other from Gruv Gear.

First let's just talk about looks, well the as you can see there's really quite a lot of difference. Looks are mostly a question of taste and I hnoestly go for the Hufschmid. It just looks better and more resistant.

Lets talk about how they perform, starting with the gruv gear, it does it's job quite well, but two things really came to annoy me. They have different sizes, that means the muter you have for your 6 string won't fit on your 7 and vice versa, same thing for basses... Second thing that was a bit disapointing was the quality of the velcro, there isn't much to start off with and after a while it just doesn't hold the muter on the neck anymore.
Ok the Hufschmid one now, well pretty flawless to be honest, one size fits all, tough velcro, nice and wide so it really kills out all the unwanted noise (making you feel like a guitar god).

All in all I would say that we have two similar but completely different products, the gruv gear is cheaper but doesn't last as long and you'll need a different size for each instrument. The Hufschmid is better all round, more expensive but sturdier and universal. You can just see the difference in between handmade quality and mass produced factory goods quite clearly.
Did you find this review helpful?yesno
»

Other Hufschmid Guitars other Guitar Accessories