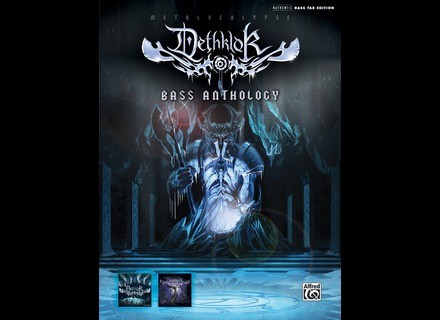 Dethklok: Bass Anthology contains 14 songs from The Dethalbum and Dethalbum II, selected by live-performance Dethklok bassist Bryan Beller. Bonus features include "The Duncan Hills Coffee Jingle" (from The Dethalbum deluxe edition), live-performance versions of "Deththeme," "Thunderhorse," "Murmaider," and "Black Fire Upon Us" as played by Bryan Beller, and an introduction by Brendon Small and Bryan Beller about the demands of playing Dethklok live vs. in the studio.

Created by Brendon Small (Home Movies) and Tommy Blacha (Da Ali G Show), the Metalocalypse TV series launched in 2006 and recently concluded its third season on Adult Swim. Metalocalypse portrays Dethklok as a death metal band with enough popularity to be the world's seventh-largest economy (right). In reality, Dethklok is the highest-selling band in death metal, on the Billboard Top 200 with The Dethalbum debuting at No. 21 in 2007 and Dethalbum II at No. 15 in 2009. Both albums contain full-length versions of songs partially heard on the show.