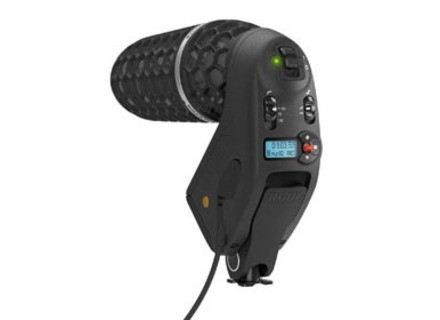 VideoMic HD, Other Microphone from RODE in the VideoMic series.

The Stereo VideoMic Pro is based around a matched pair of ½”cardioid condenser capsules in a coincident XY pair. The Stereo VideoMic Pro builds on the feature set of the VideoMic Pro, with an ergonomic form factor suited to DSLR, consumer camcorders and large-sensor video cameras. The integrated shock mounting system is designed to provide isolation from vibration and mechanical noise.

The rear of the microphone body features the power and equalisation controls, including a high pass filter at 75Hz which is designed to cut out the noise generated by air conditioning, traffic and other undesirable low frequency interference. A -10dB PAD allows the user to reduce the sensitivity of the microphone. Like the VideoMic Pro, the Stereo VideoMic Pro features a +20dB level boost.

File storage is via microSD card and a microUSB port is supplied for file access and possible firmware updates. An integrated headphone jack with level control allows users to monitor their recording, while a LCD display on the rear of the microphone provides visual metering as well as basic recording control.

Audio capture and output can be configured in a number of ways with the microphone’s output selection. In its default mode the VideoMic HD’s audio is recorded and outputted as a dual mono signal. When in ‘safety recording’ mode, the microphone captures and outputs the standard audio signal on the right channel and a -20dB attenuated signal on the left channel. A third output setting allows for dual mono audio capture and a balanced signal output using the optional RØDE VXLR 3.5mm to XLR adaptor.

The VideoMic HD offers a 3.5mm mono line in that supports ‘plug in’ power, allowing for the connection of a secondary microphone such a lavalier or headset. The microphone’s fourth output mode allows the tracking of the line-in to one of the stereo channels, both on the on-board recorder and through the 3.5mm output jack.

For more information and to be notified when the microphone begins shipping, visit rodemic.com/vmhd.